DUBROVNIK AND THE ELAPHITI ISLANDS

The city of Dubrovnik, often nicknamed "the pearl of the Adriatic" stands for one of the most stunning towns in Dalmatia and wider.  Visiting the city, especially the old town, seems like constantly being immersed in pure beauty.

It is hard to say what exactly about the city of Dubrovnik is so captivating: the ancient city walls, Gothic, Renaissance, and Baroque buildings, glistering blue sea, nice beaches…it is simply the whole package! 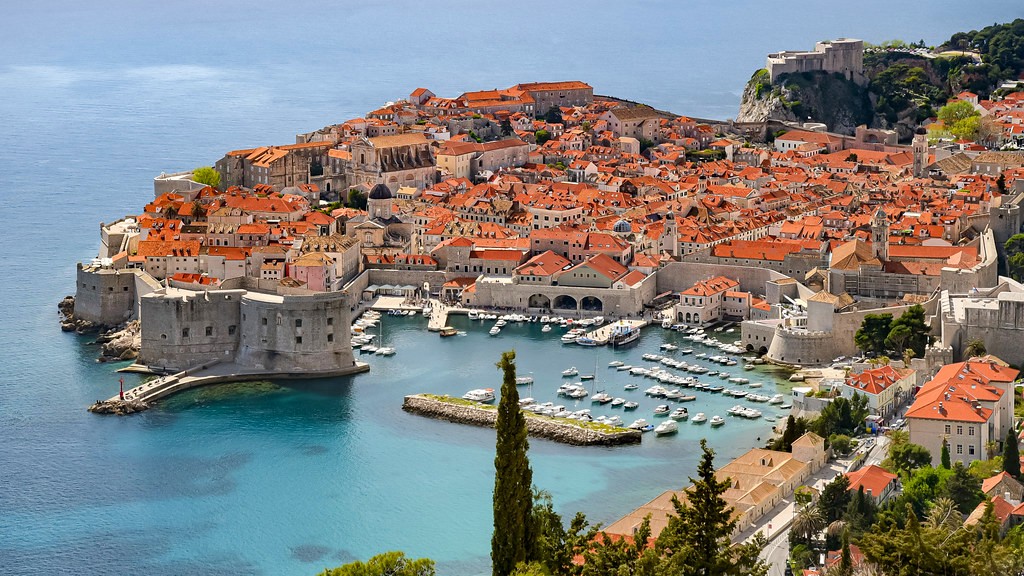 Meet Dubrovnik town - get ready to fall in love!

The city is on UNESCO’s list of World Heritage sites since 1979 with its extremely rich culture and tradition. Dubrovnik is, metaphorically said, the historical fount of artists, scientists, diplomats, and seafarers, and today, it offers museums and galleries, as well as historical attractions that leave one in awe.

In one of the historically significant locations in Dubrovnik, you can often sit for a concert of classical music. In case you are not a fan of Beethoven, there is lively nightlife waiting for you in one of the top clubs. However, there is also plenty of interesting content throughout the year, so if sailing to Dubrovnik, your sailing holidays in Croatia will certainly be entertaining. For example, there is the annual Dubrovnik Summer Festival; it lasts 45 days during which you can see diverse programmes: music, drama, opera, ballet, games…, all witnessing the town's culture.

Despite its complicated past, today, the city of Dubrovnik is one of the top tourist destinations in the Adriatic. Indeed, it attracts tourists like honey bears: a few years ago, Dubrovnik had to take measures to reduce the number of incoming visitors.

It also became a popular filming location due to its unique beauty. You might be familiar with the worldwide famous HBO television series Game of Thrones that used the walls of Dubrovnik (“King’s Landing”) as one of its filming locations.

Since the city is a very popular tourist destination it is only logical that there is a wide offer of fine restaurants and coffee shops.  When on sailing holidays in Croatia, you don’t have to search for a place where to try some exquisite gastronomic specialties and relax over a glass of wine; you have plenty of choice. 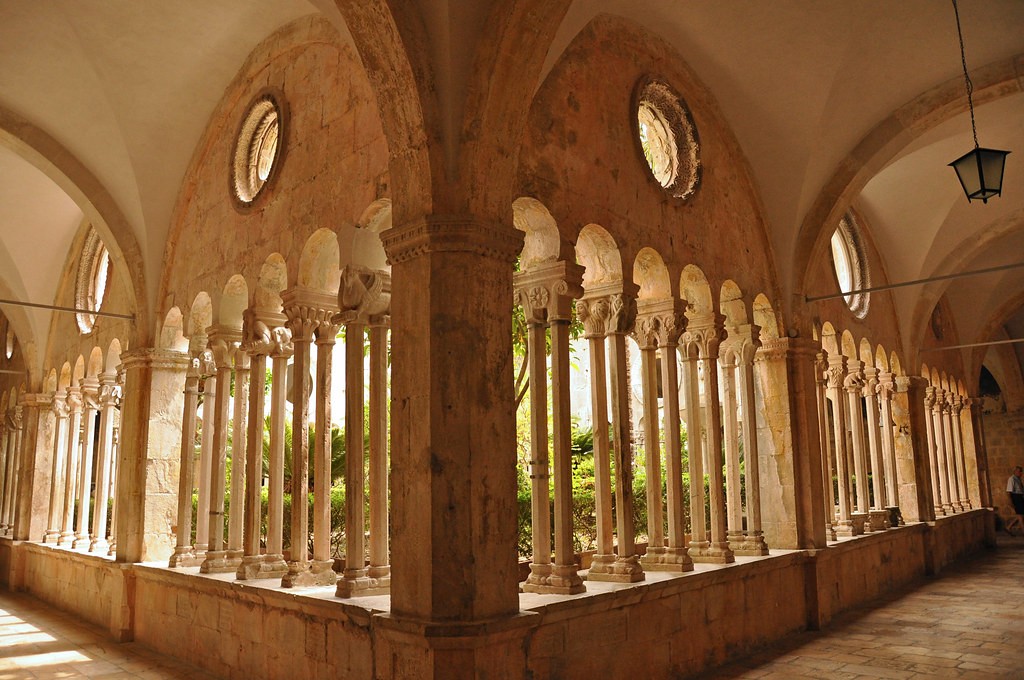 Way back in the 7th century, today’s city of Dubrovnik was founded and originally known as the city of Ragusa. Ragusa was the official name of the city until the beginning of the 20th century, although the two were both used for centuries.

Thanks to the good position on the Adriatic Coast, Dubrovnik was an important strategic location at sea already in the 13th century.

From the 14th till the 19th century, the city was an independent, free state, and it grew in prosperity. It was the center of maritime trade as well as the center of Croatian literature, and it became popular also for its adept diplomacy (as already explained, it was the fount of seafarers, artists, and diplomats).

However, not everything was so positive. In the second half of the 17th century, a devastating earthquake almost demolished the city. Later, Dubrovnik was occupied by French forces, then it became part of the Kingdom of Italy to finally be incorporated into the Illyrian Provinces.

The city suffered again at the end of the 20th century due to the several months-long occupation and shelling at the time of the Croatian War of Independence.

The restoration and repair took place in the early 21st century and Dubrovnik came out of the difficulties as a complete winner. Its amazing churches, palaces, and monuments from different periods are well preserved and the city is still to be renovated. 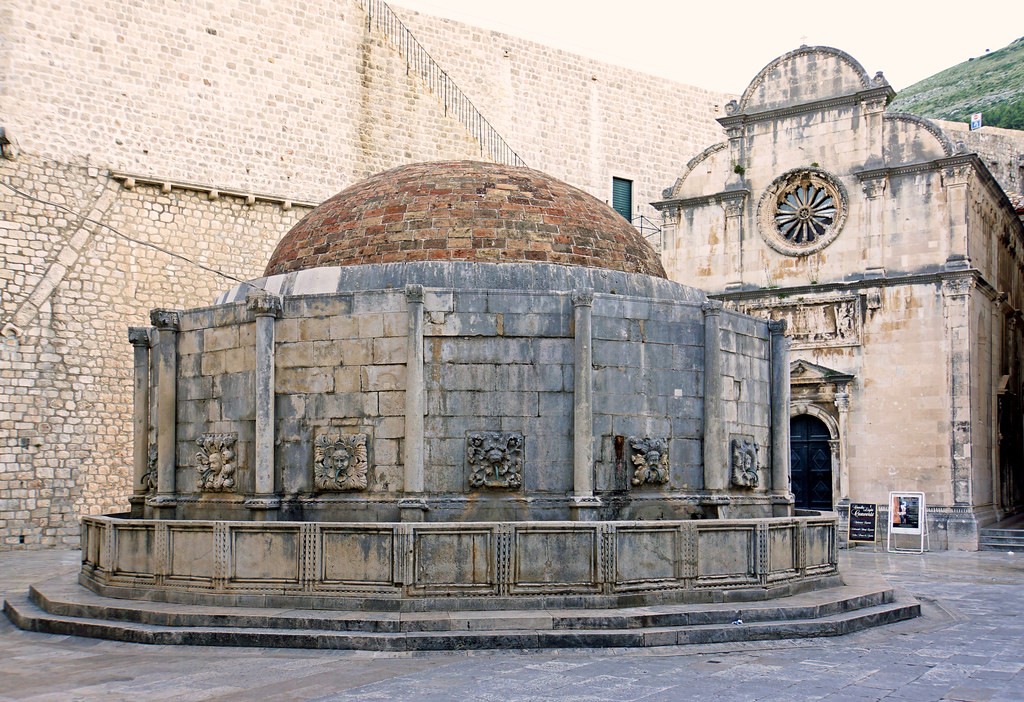 THE MOST IMPORTANT HIGHLIGHTS OF DUBROVNIK

The first thought of Dubrovnik - the old walls! They are definitely the highlight of the city and the most visited feature of Dubrovnik. They are also the first thing you spot when sailing in Croatia towards Dubrovnik. 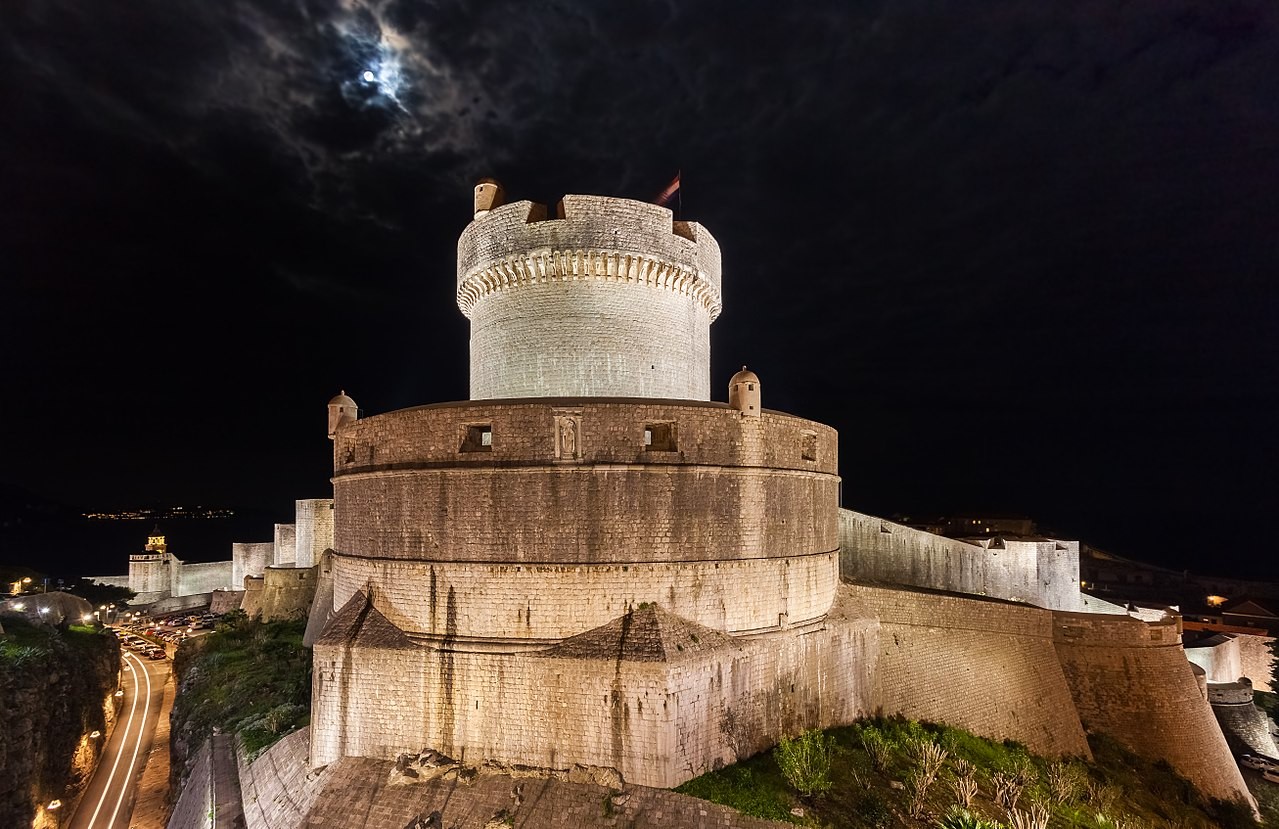 The oldest part of the walls dates from the 9th century, while the rest was built 5 centuries later. Altogether 2 kilometers (1.2 miles) long, the walls are the thickest on the landward side, while on the seaward side the walls are significantly thinner.

In the 14th and 15th centuries, the town of Dubrovnik was adorned with beautiful forts: Fort Minčeta on the landside, Fort Bokar and Fort Lawrence on the west, Fort Revelin and Fort St John on the east – the town in the stone barricade! 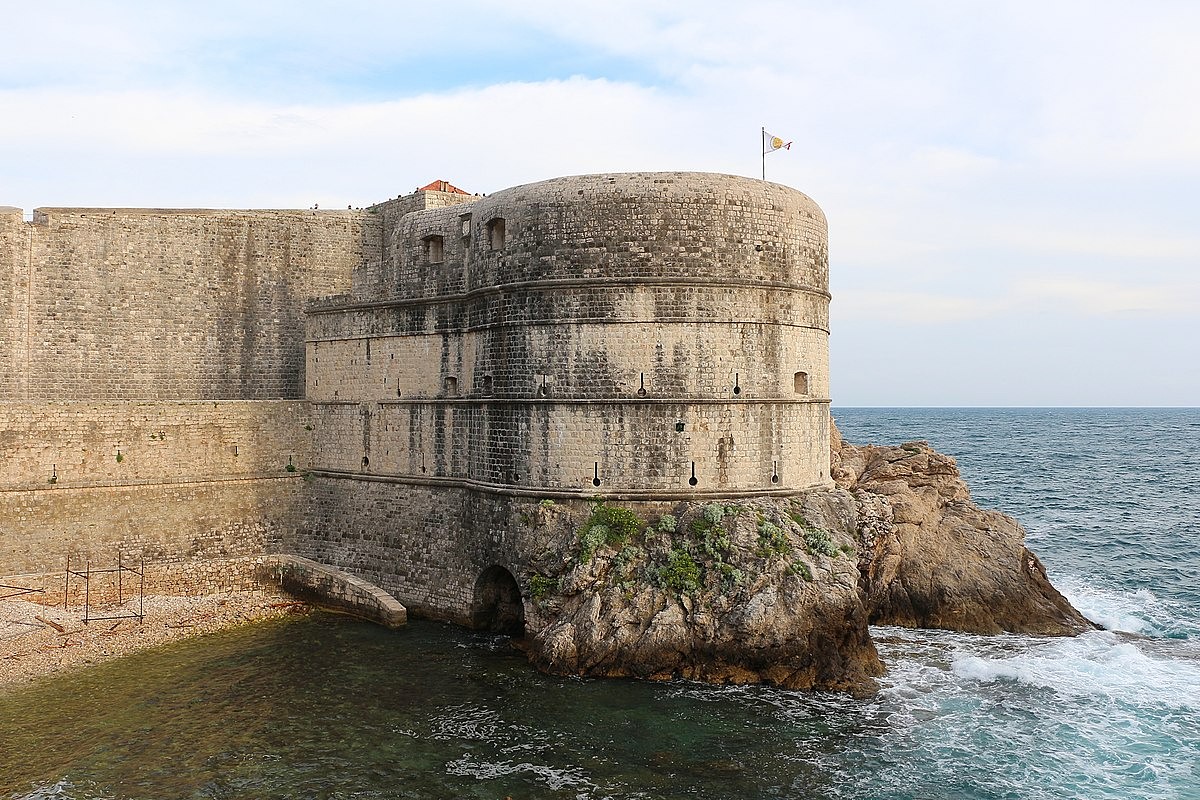 The walls of Dubrovnik - Fort Bakar 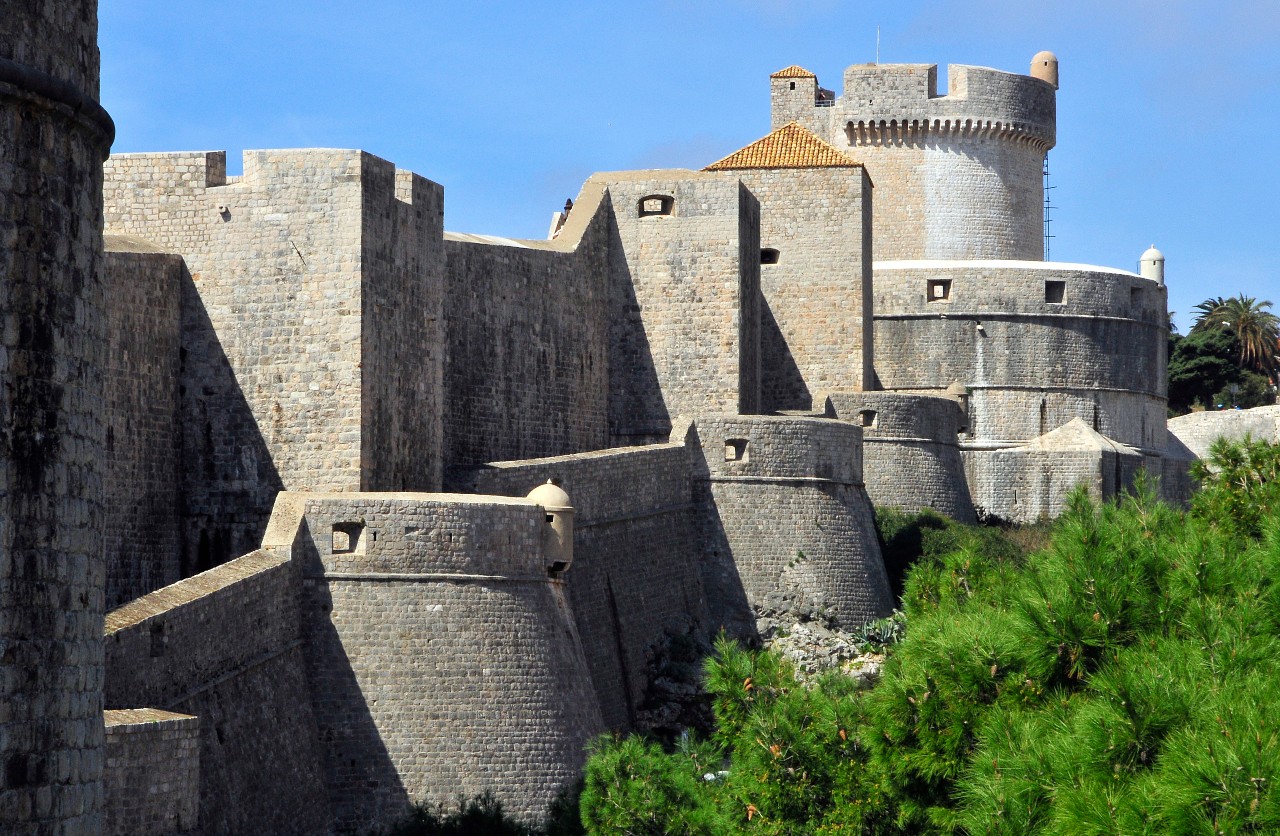 The walls of Dubrovnik - Fort Minčeta

When walking through the city of Dubrovnik, you can encounter several statues of the patron saint Sveti Vlaho (Saint Blaise). One of the large and stunning churches is named after the saint – the 18th century St. Blaise’s Church. 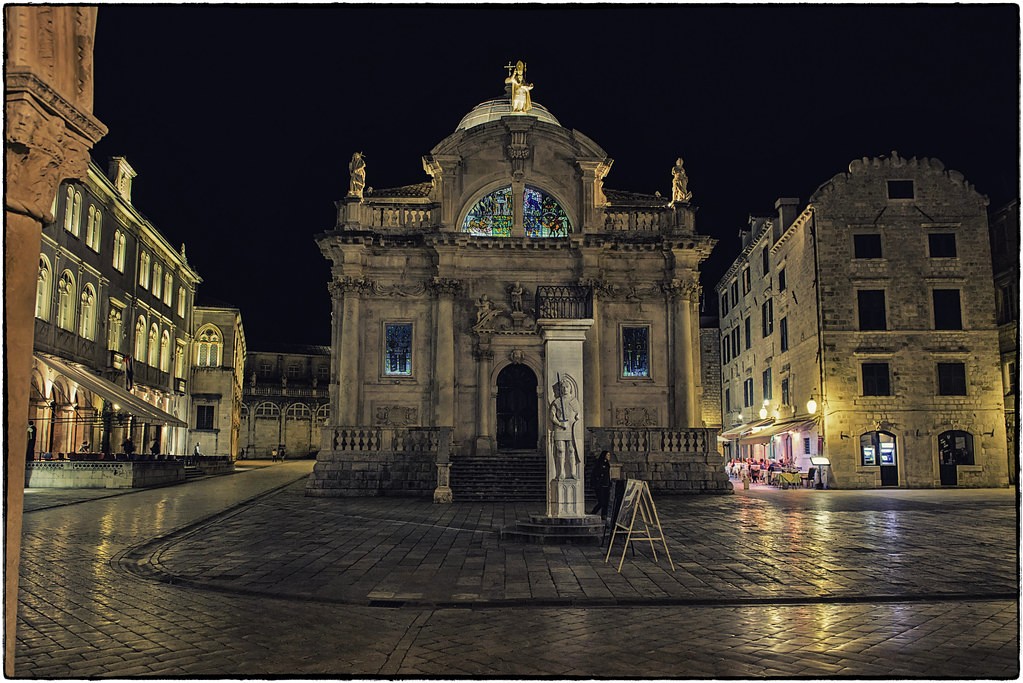 Not many Renaissance buildings remained standing after the earthquake in the second half of the 17th century, but those few that had survived are today testifying of the town’s Renaissance period. The buildings to emphasize are the 16th-century Sponza Palace, the Gothic-Renaissance Rector’s Palace, the St. Savior Church, and the Franciscan Church and Monastery. 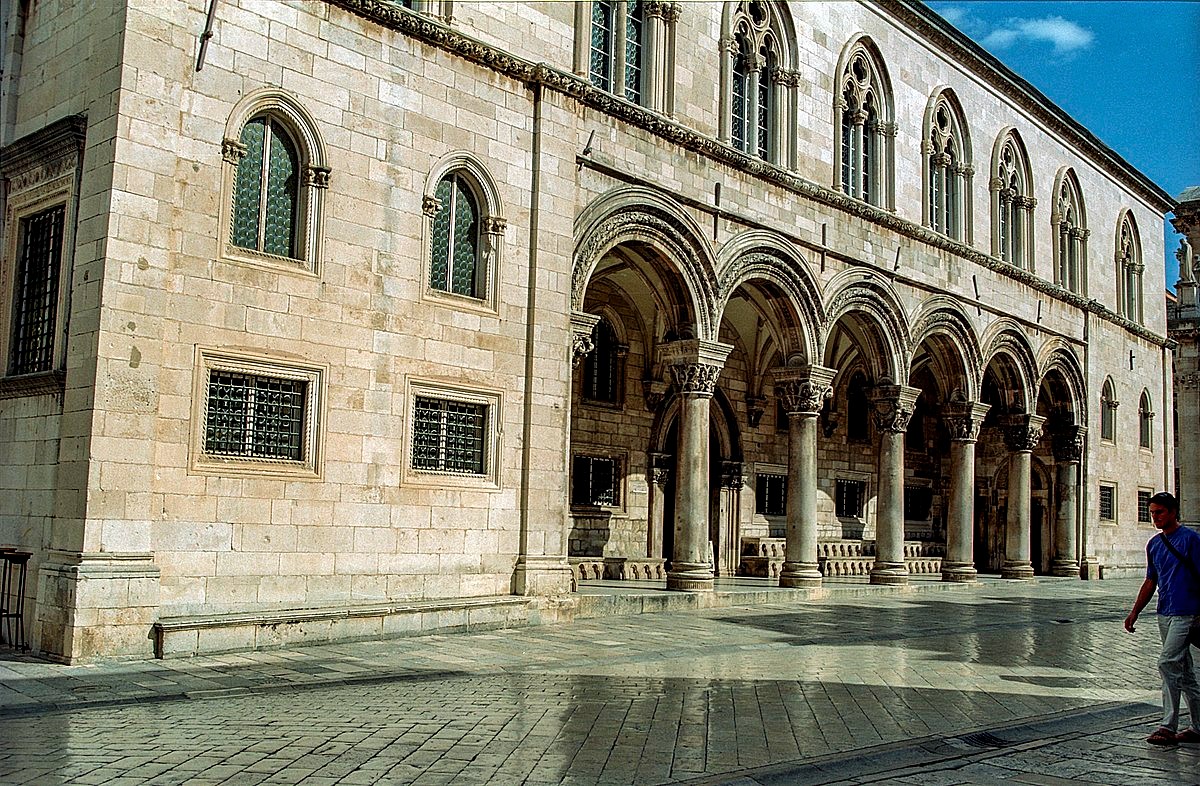 The Gothic-Renaissance Rector’s Palace in Dubrovnik

A stunning landmark of the town is the 15th century Bell Tower with a clock, a 31-meter-high imposing building. 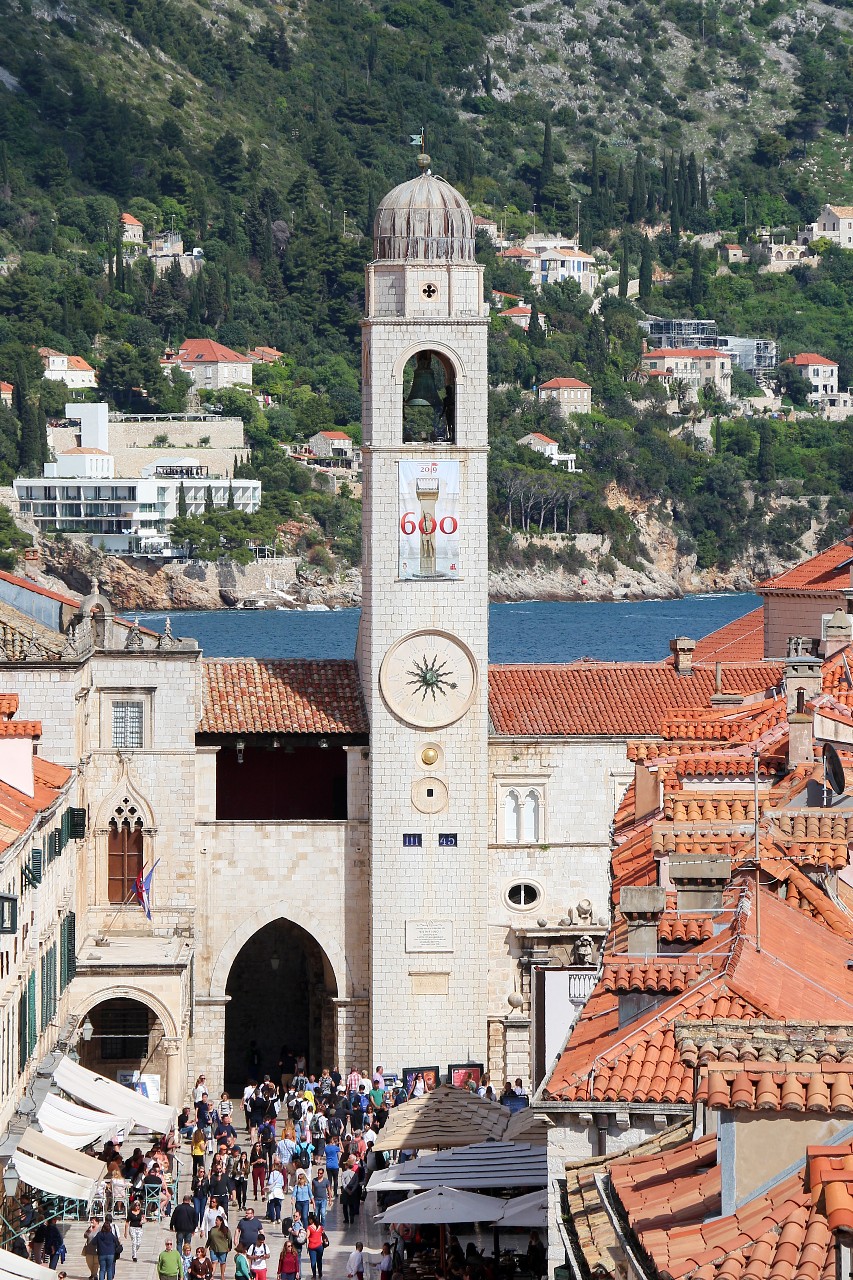 The main attraction of this city full of wonders is the walk along the old city walls. To take this spectacular walk is the first thing on the list of every tourist visiting Dubrovnik - after climbing to the top, the view over the old town and the sea is truly crème de la crème. Even if you get tired during this walk (that you probably will, thanks to hot days and uphill paths), you will not regret it.

You can enter the walls in 3 ways: from the Pile Gate, the Ploče Gate, or the Maritime Museum. It is advisable to avoid the Pile Gate if you don’t like one of the two: steep paths or crowds.

When buying a ticket to visit the old walls, it also includes a visit to Fort Lawrence. 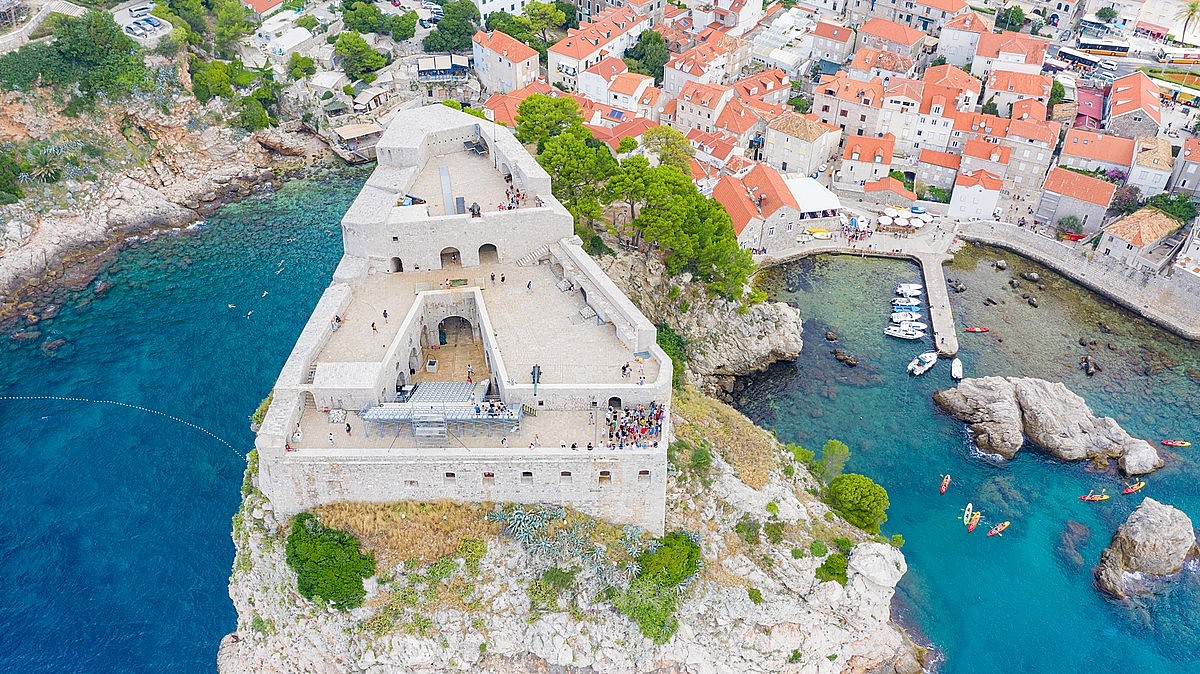 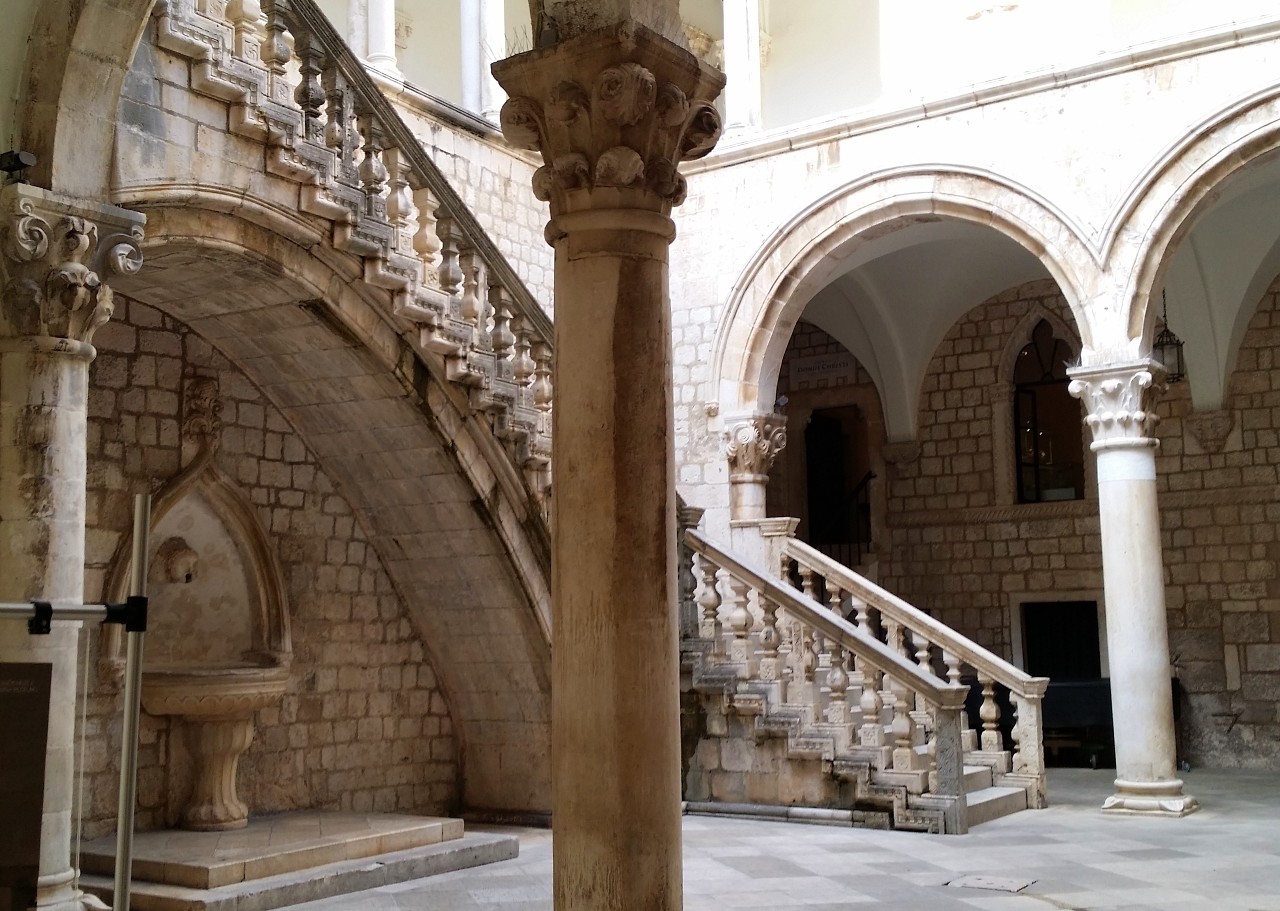 There is Dubrovnik’s main beach Banje where you can enjoy swimming and sunbathing, as well as relax in the Eastwest beach club; another famous beach is Copacabana (after the famous beach in Rio de Janeiro) on the peninsula of Lapad. 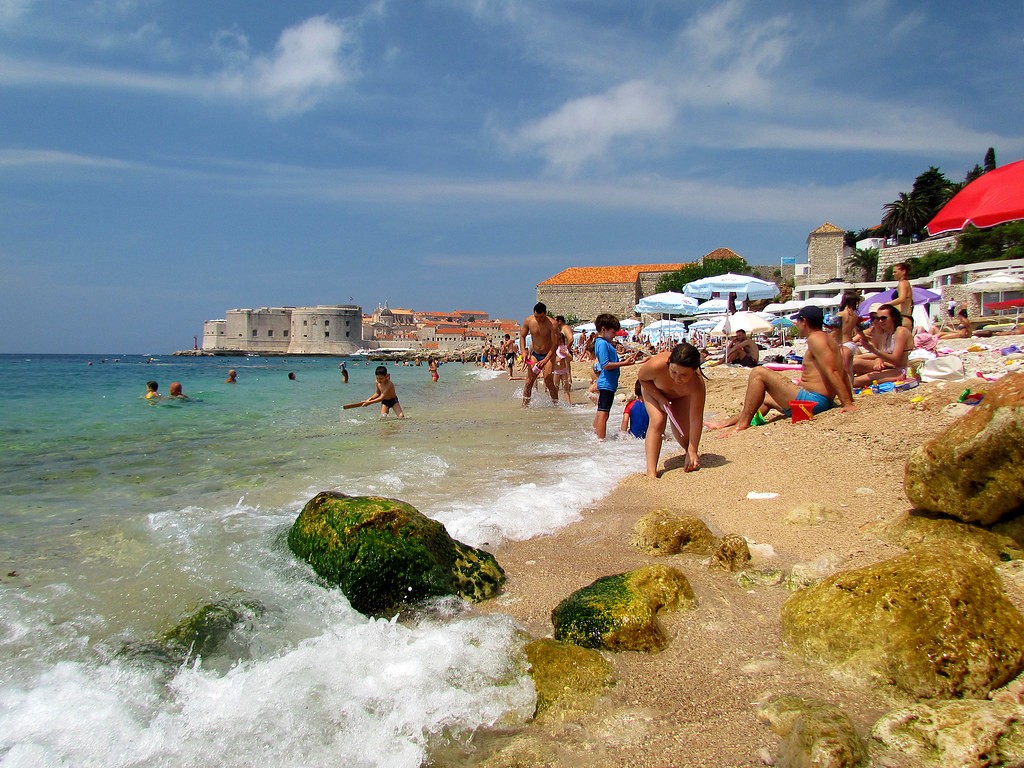 Take a cable car ride, a taxi ride, or simply hike up to Mt Srđ to get the most stunning views.

Just a breathtaking view down from Mount Srđ

We always recommend consulting Tripadvisor to find the best restaurants.

We certainly recommend sailing to the Elaphiti Islands archipelago, especially if you are already visiting Dubrovnik on your sailing holidays in Croatia. These islands are stretching northwest of Dubrovnik, and the main, inhabited ones and those most visited are Koločep, Lopud, and Šipan. However, these three islands are not crowded at all: each has 200-400 inhabitants, and on Koločep and Lopud cars are not allowed.

The islands are to enjoy peace and quiet, for those in love with nature, but also for those just needing a day of rest from the everyday-like surrounding.

Koločep is the closest to Dubrovnik, and there you can enjoy green, wooded nature and a tranquil atmosphere. Lopud island is the one with beautiful beaches, while Šipan, the largest among the three islands, is perfect for a bike ride. 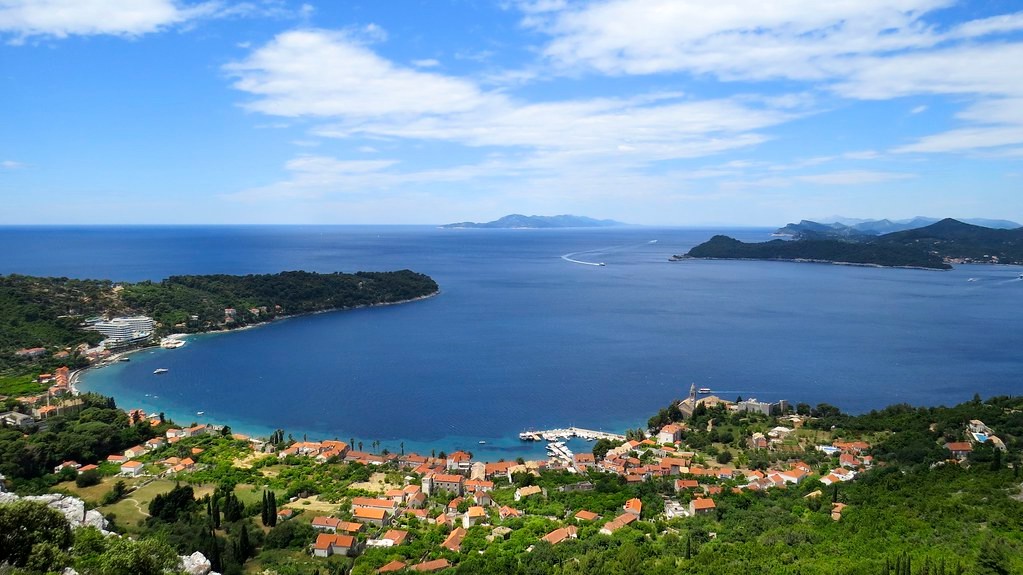 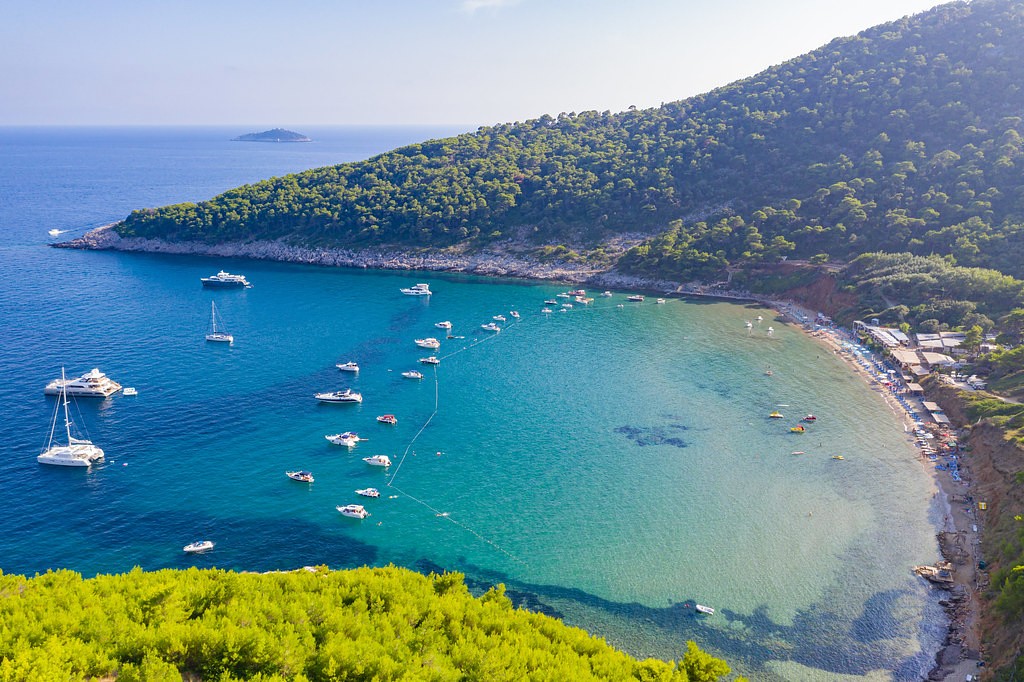