MLJET - THE GREENEST AMONG THE CROATIAN ISLANDS

This island is among the larger islands of the eastern Adriatic coast, and it is an inevitable destination when sailing the very south of Dalmatia. Similar to the Lastovo Archipelago, Mljet is also a “green island”.

Actually, it is Croatia’s greenest island: over two-thirds are covered by forest, and a third of the island’s surface is officially a National Park (one of 8 National Parks in Croatia). The island completely deserved that title thanks to its rich underwater life in the clear blue sea, beautiful shore, and varied Mediterranean flora.

Mljet is even referred to as “one of the most seductive of all the Adriatic islands”, but it was discovered as a perfect tourist destination relatively late, so its beauty is still well preserved. The island has a lively marine life, but wine and olive growing are also very popular. 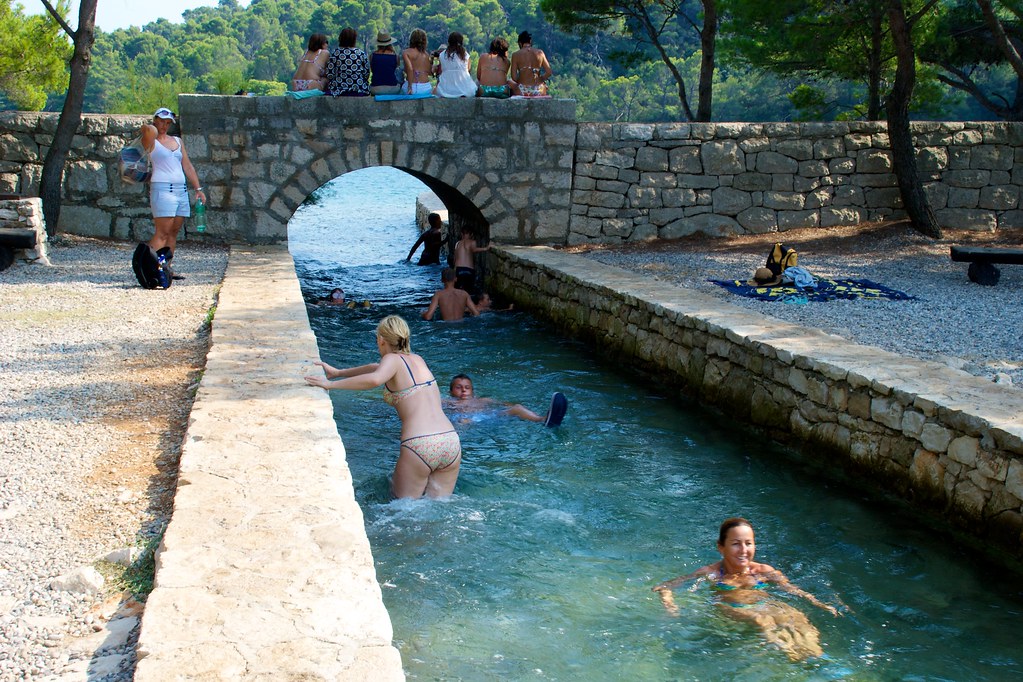 It gets even more interesting: there is actually a small St Mary’s island in the middle of the Great Lake! An island on the island of Mljet! And it is home to an old Church and Benedictine monastery built in the 12th century for Benedictine monks who ruled the island at the time. Over the years and centuries, the monastery was being rebuilt, and today, it represents a valuable cultural monument! The monastery also houses the restaurant Melita (the island was called “Melita” = “honey” by Ancient Greeks, which later evolved into the Slavic name “Mljet”) where you can take a break over lunch or a drink when visiting Mljet on your sailing holidays in Croatia. Tourists just love this interesting location! 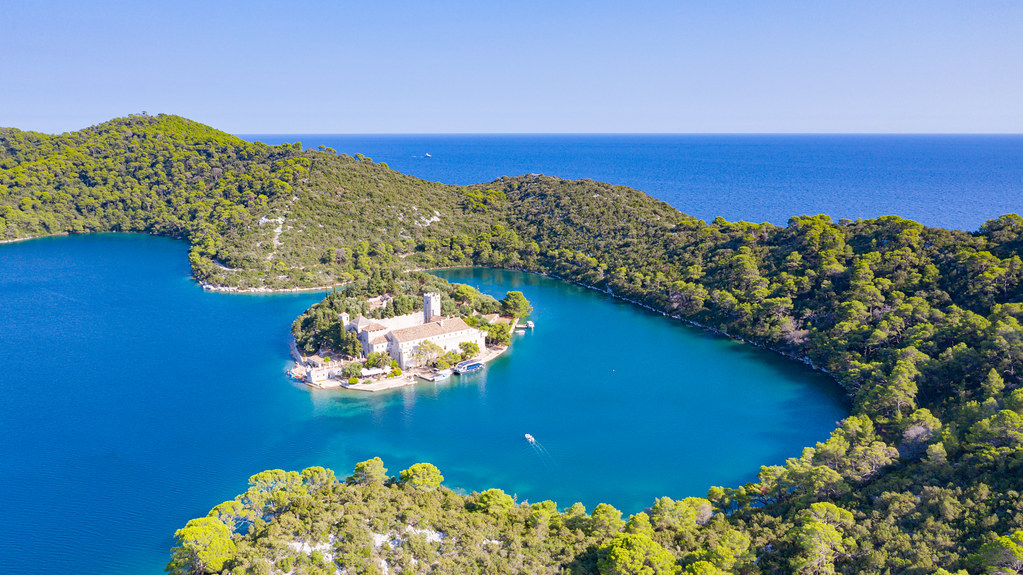 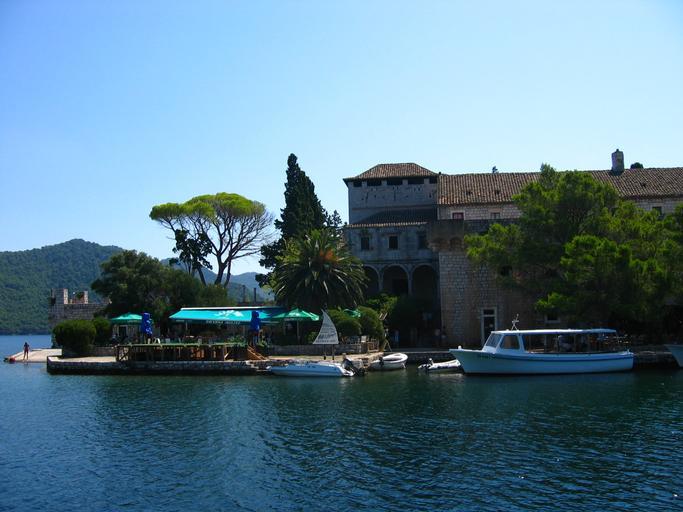 Although the administrative center of the island of Mljet is Babino Polje (literally translated as “Grandma’s field”), the most popular places are Pomena, Polače, Sobra, and Goveđari.

Polače is a settlement and a port on the northern coast of Mljet. It lies in the largest, deep bay on Mljet island, and it provides the best shelter thanks to the 4 smaller nearby islands that protect it. Therefore, the bay is a quite popular anchorage when sailing the southern Adriatic, and, during summer, it can get crowded. However, if you would like to anchor near Mljet, we recommend choosing this popular bay.

Polače Marina - beautiful view all the way to Pelješac Island

In Polače is located a large 5th-century Roman palace after which the settlement was named – “Polace”. The walls and the tower of the palace are of great significance and their beauty dominates the settlement, although there are other beautiful ruins, some dating even from the 1st century.

While the settlement has only around a hundred citizens who are settled around the Roman palace, you can still find a few restaurants and cafés there, as well as a small shop.

Another popular but small place on Mljet island, Pomena, is located on the northwest coast and only 5km away from Polače. You can even follow hiking trails to get from one place to another.

Pomena is in the first place a fishing village, but on the other hand, it is also the most tourist-oriented place on Mljet. Even though there are only 50 permanent inhabitants in this settlement, thanks to the beauty of the island, summers get crowded. The place has got several moorings, a few restaurants, as well as private apartments, and even a hotel complex to accommodate its visitors.

What is most important to sailors, is that there is a secluded bay just outside the village where you can safely anchor when on sailing holidays in southern Dalmatia. 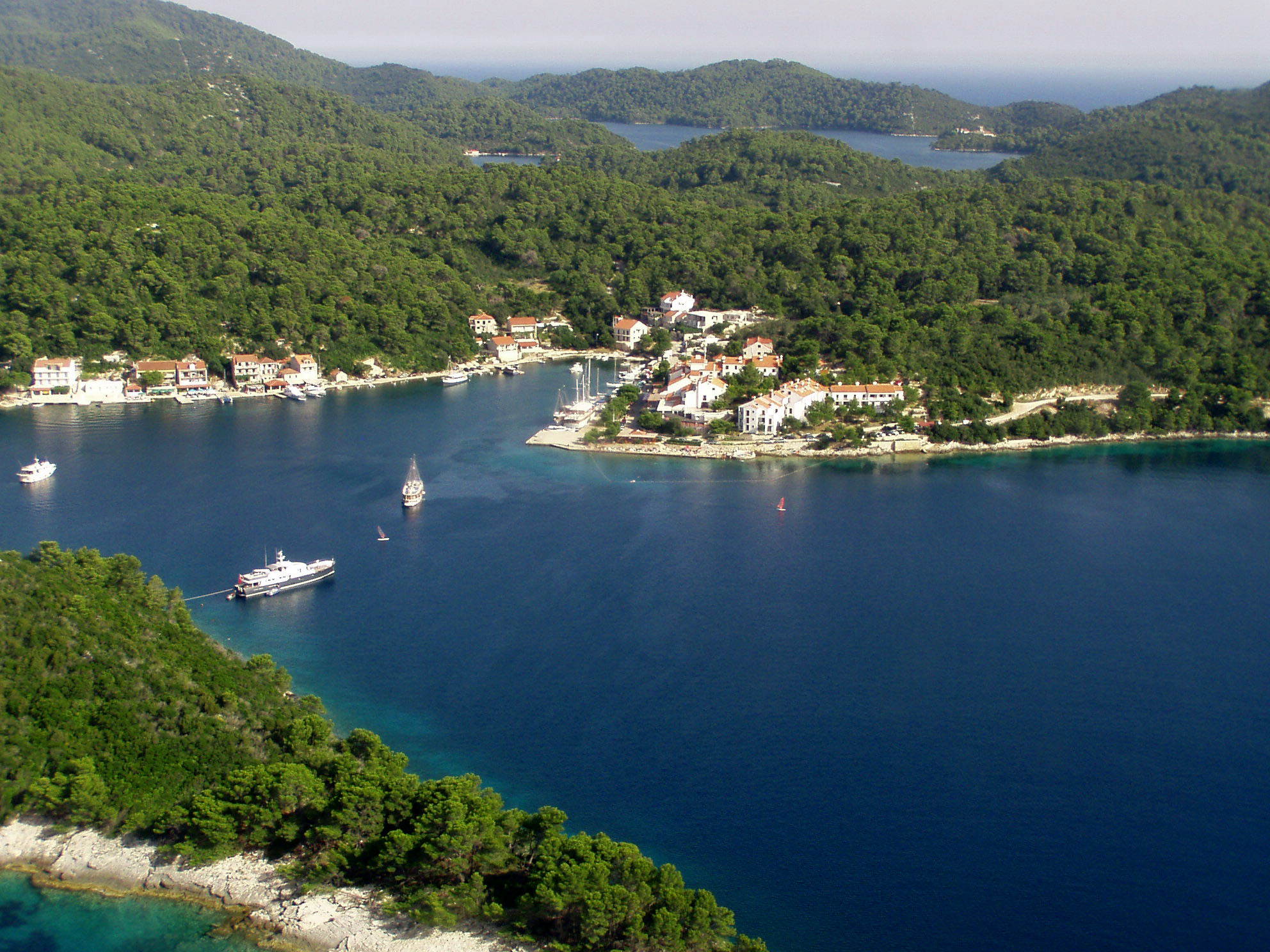 If you like to cook for yourself on the boat, you can find everything you need for your meals (fruits, vegetables, meat, wine…) in the small market in Pomena. The shop is located just a few hundred meters left from the ferry port.

This sun-kissed bay is located on the other, less busy end of Mljet island, opposite of the settlements Pomena and Polače. 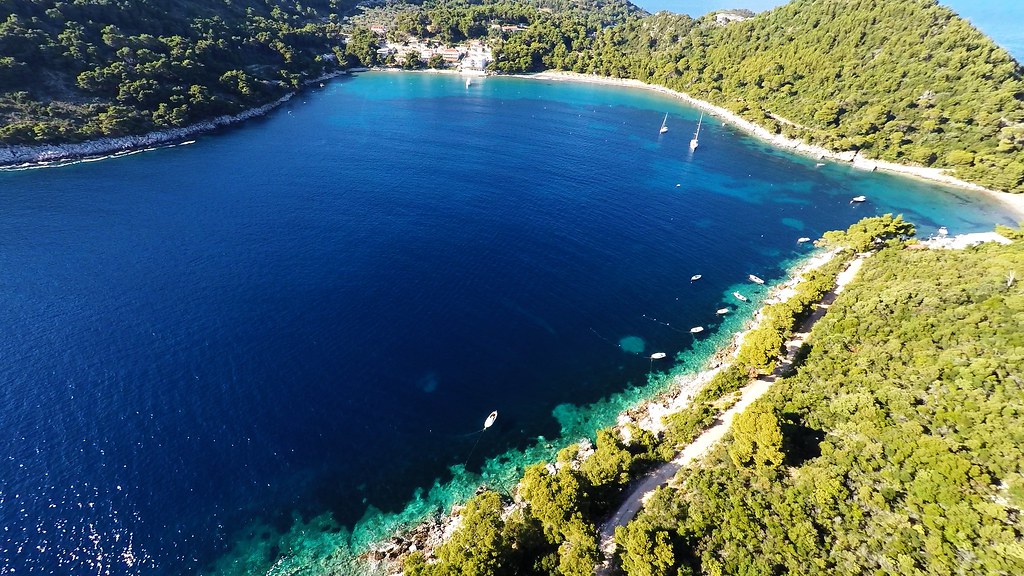 The south coast is not really ideal for those sailing in Croatia since it is not protected from winds, and it is full of rocks and islets making it difficult to maneuver. However, when sailing around the southeastern tip of the island, find shelter in this beautiful, large bay, outside the National Park. Savor the day at sandy beaches (Velika and Mala Saplunara), surrounded by pine woods. 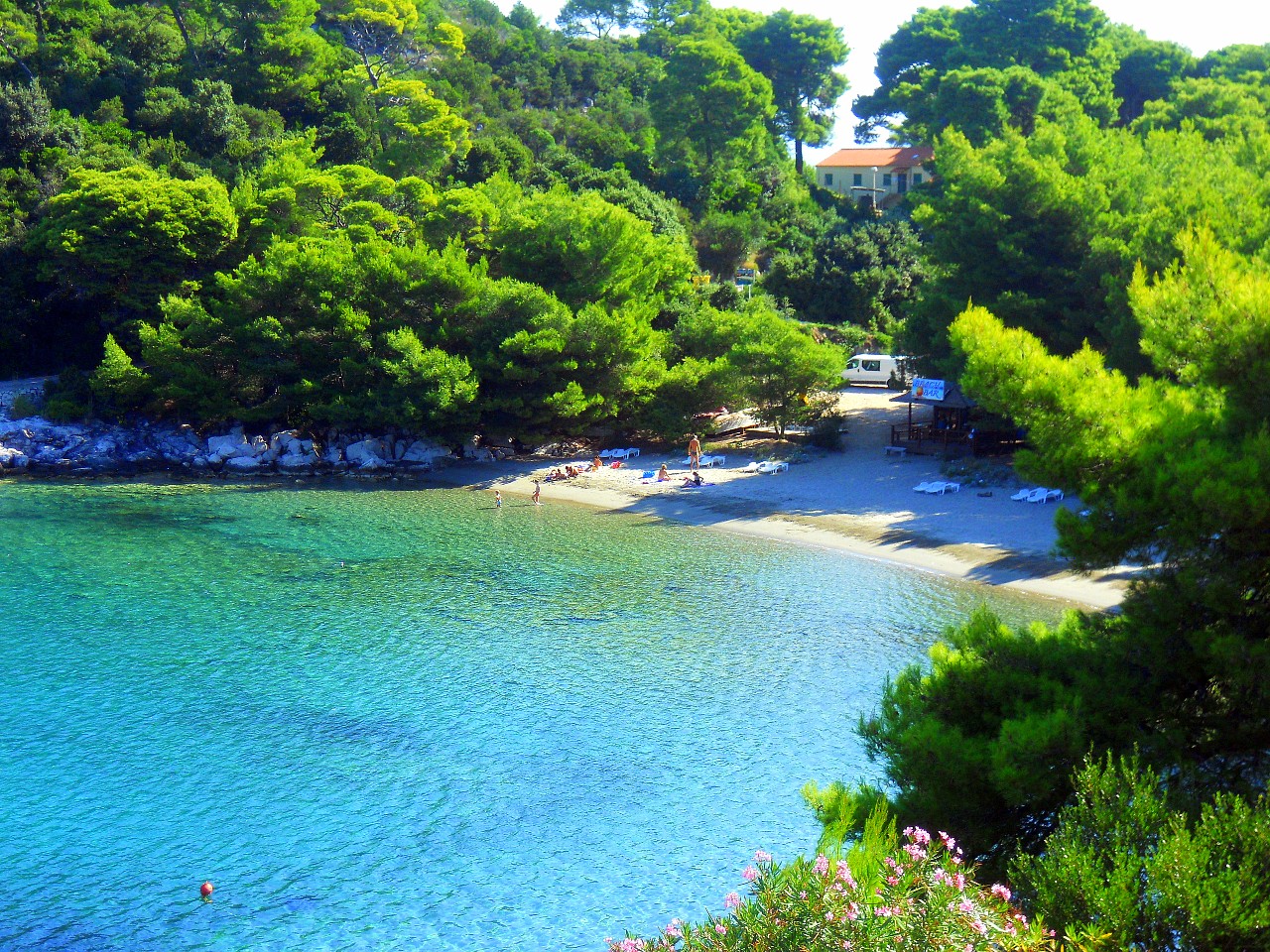 You can also have a meal at a modern restaurant Villa Mirosa, enjoy a drink in the café, or restock the necessities in the small shop. The bay will not disappoint you.

The National Park is on the northwest part of the island and it covers a large area that borders the two lakes (the Great Lake and the Small Lake). You can access the Park from Pomena or Polače using footpaths or by bus. If you choose to go on foot, approx. it takes a 40-minute walk from Polače and a 15-minute walk from Pomena to get to the lakes. The walk is rather pleasant since it takes you through beautiful flora and fresh air. Don’t worry about getting lost, the path is marked all the way to the desired destination.

There is no official entrance to the NP, but there are two entrance and ticket stands (one in Polače, the other in Pomena), and if you are to pay a visit to the Park you ought to buy a ticket at one of these stands. There, you can also get a Park map or an informative brochure, which can be very useful.

If you are planning a whole day visit to the park, there is a small market right next to the entrance stands where you can buy food and drinks. In case it gets really hot and you forgot a hat, or in case you wanted to take a swim but forgot beach towels, snorkeling gear, or similar, there is a shop in the Park that offers all of those necessities.

Near the shop, guests can rent a bike and enjoy a ride around the lakes! 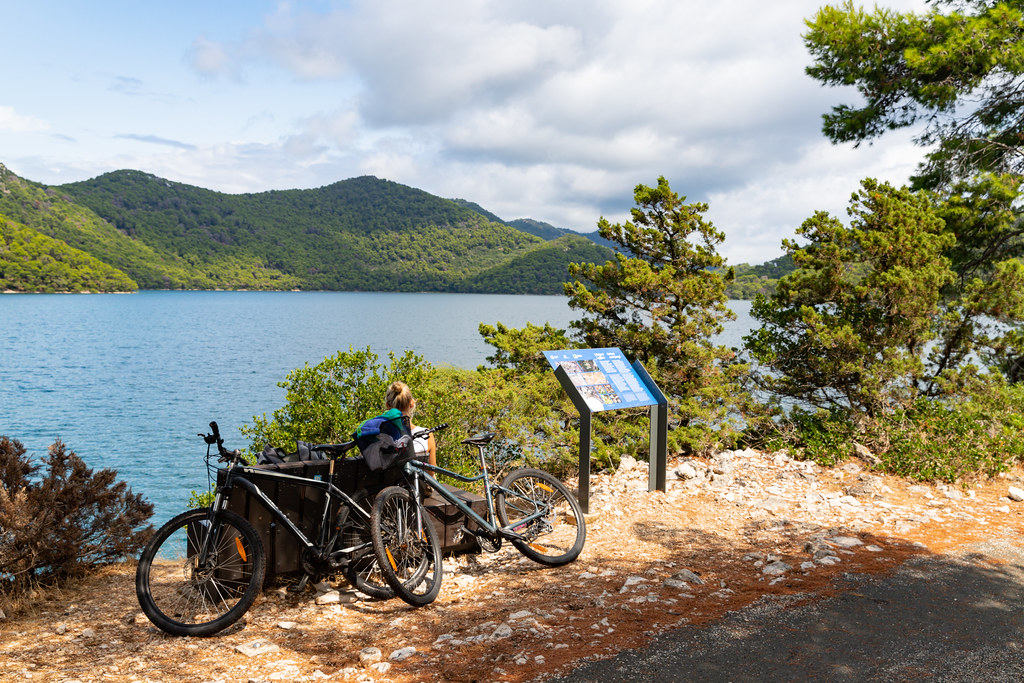 Cycling around the Great Lake 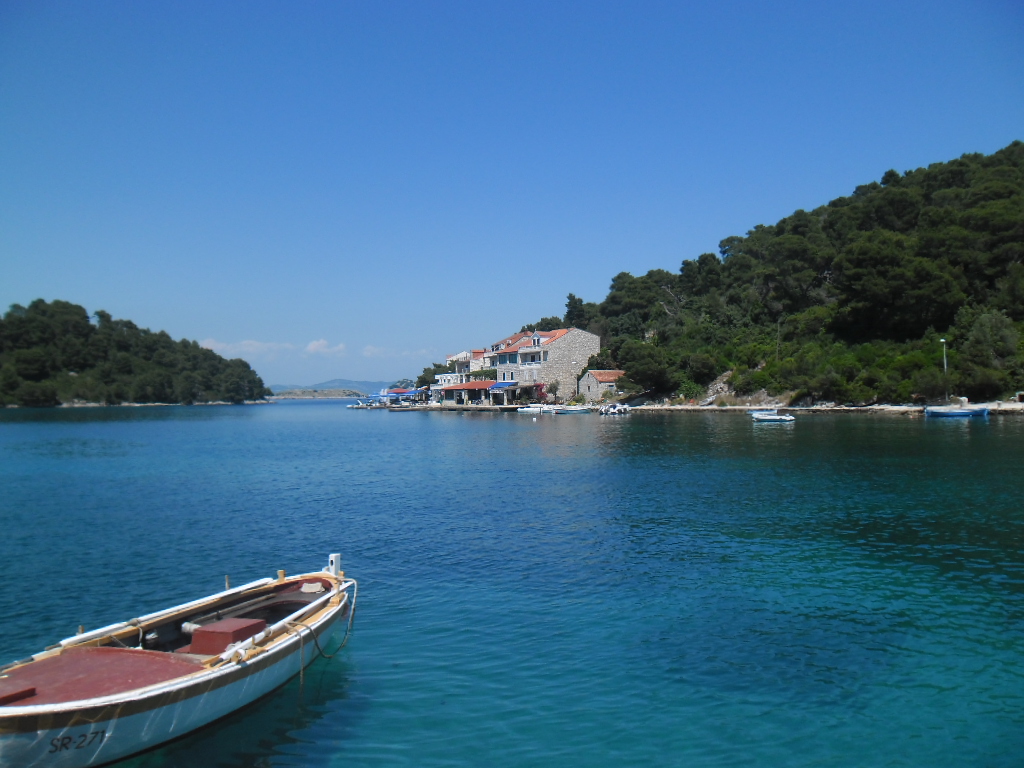 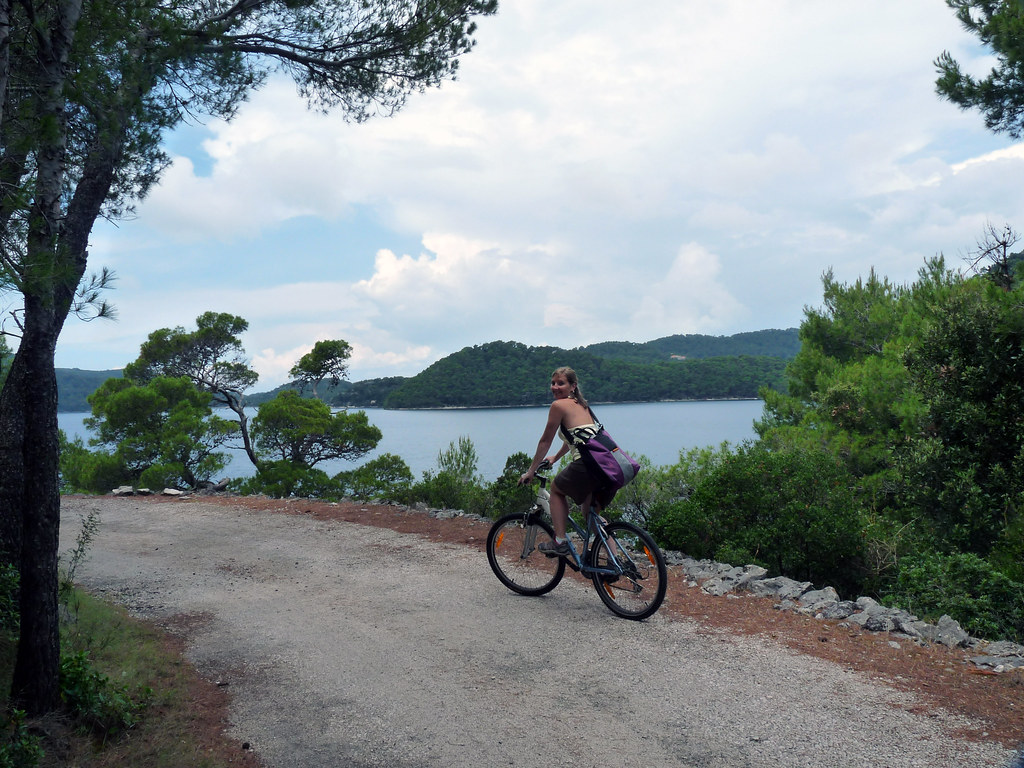 Renting a bike and enjoying cycling in the peaceful paths 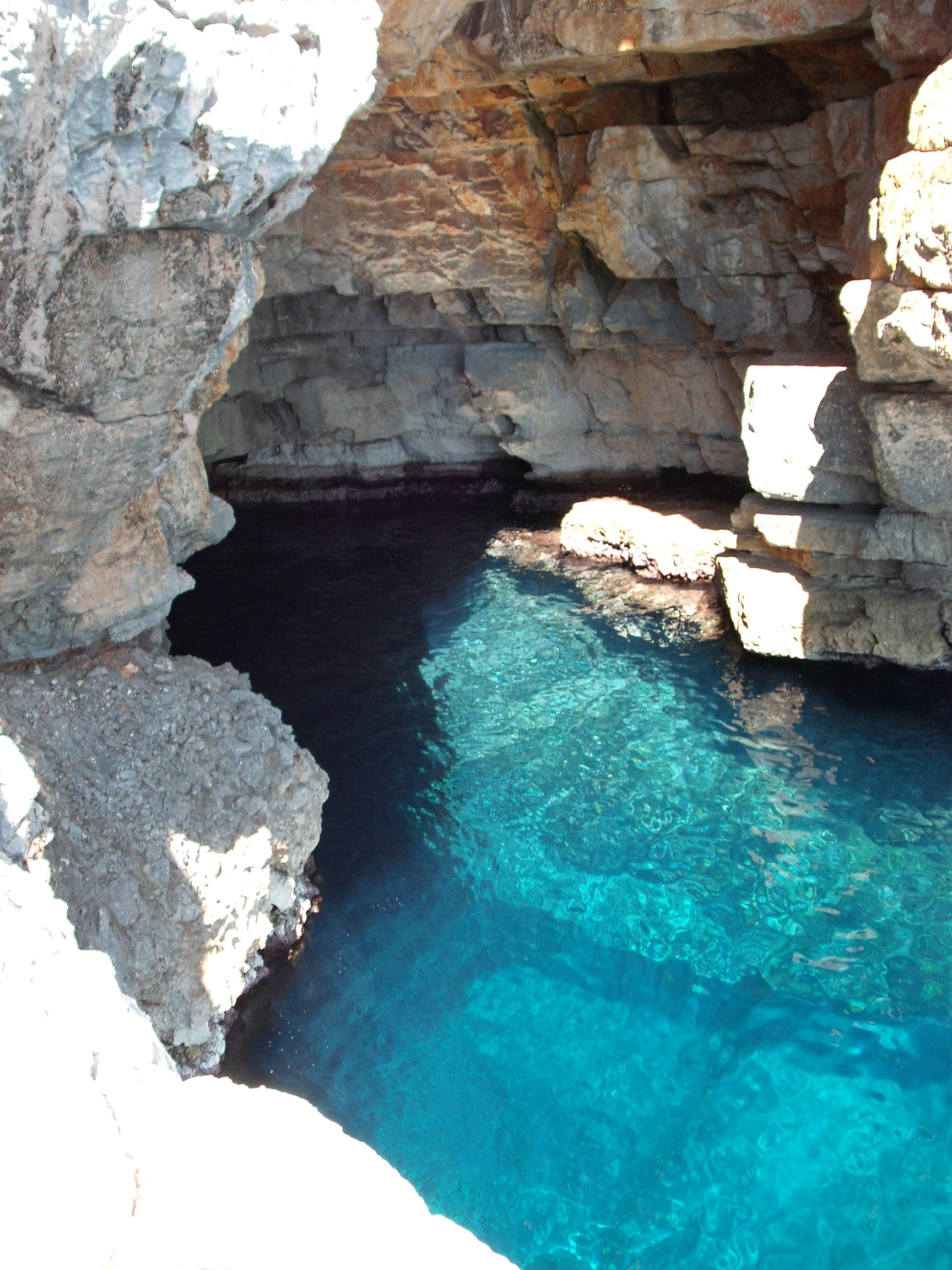 Reach the Odysseus' Cave - could the see be more clear?

Mooring options: Pomena or Polače, on a jetty or restaurants' moorings.