HVAR - TOWN ON THE EPONYMOUS ISLAND

Hvar island: this jewel may be the brightest among the islands of Croatia. It has been very famous for a long time, since the ancient periods, because of its favorable position (strategic and nautical). The colorful history of the island and, therefore, various cultural and natural remains make this island rich and attractive.

In recent times even celebrities are curious about this island, so they are coming to discover its beauties.

The island has even been mentioned and praised in verses and portrayed by many painters. We recommend not to miss paying it a visit when on your sailing holidays in Croatia.

However, the town of Hvar is the highlight of the eponymous island and to visit just this place is more than enough to experience it all: intact Mediterranean nature, rich historical and cultural heritage, and the lively tourist present and vibrant nightlife.

Hvar is a town (the largest settlement) and port on the island of the same name. It is located in a bay on the southern side of the island. Its past goes way back to ancient times, just like the past of the whole island of Hvar. The town itself has got a very rich history: it once was the trading and cultural center of the Adriatic, as well as an important Venetian naval base with a strong fortress at the top.

Many surviving cultural remains from various epochs (Renaissance above all) are the witnesses of the colorful past, and together with interesting architecture and natural beauty make the whole town seem like a fairytale.

These are only some of the reasons why Hvar is one of the most popular destinations on the Adriatic coast. Nowadays, the town is home to many hotels, galleries, museums, and exhibitions.

Moreover, the town has the typical Mediterranean mild climate (warm winters and hot but pleasant summers), and it is the sunniest place on all of the islands of the Adriatic. 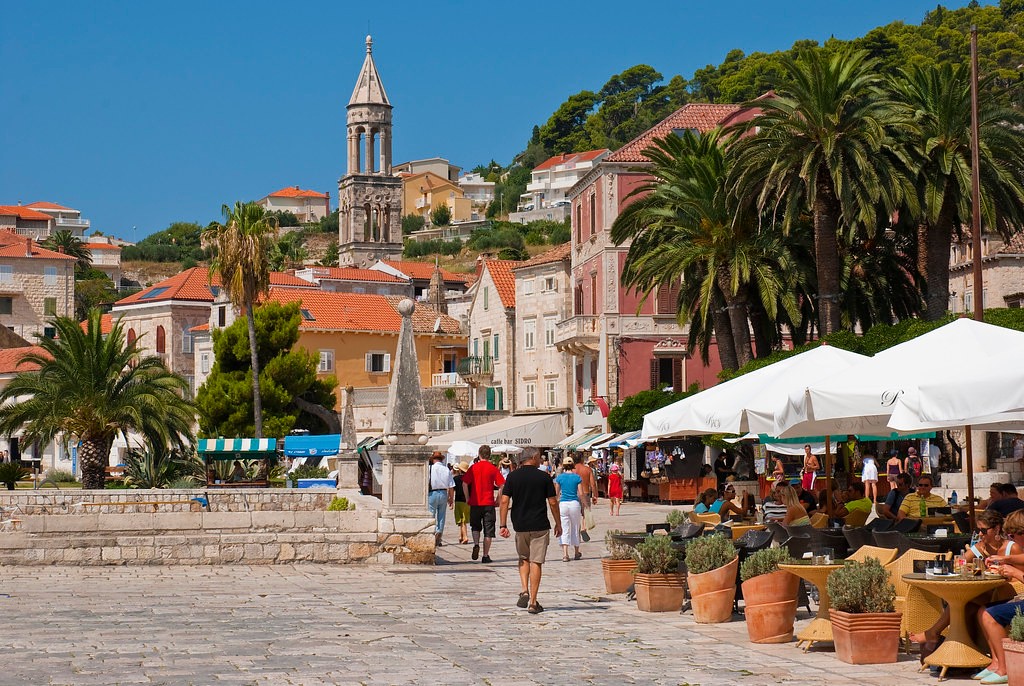 Hvar town has been built through time in different periods of the past and by different architects.

The long waterfront promenade is adorned at one part with palm trees and at another with several centuries old walls or both. An evening walk along this promenade, with a gelato and good company, is a real enjoyment! 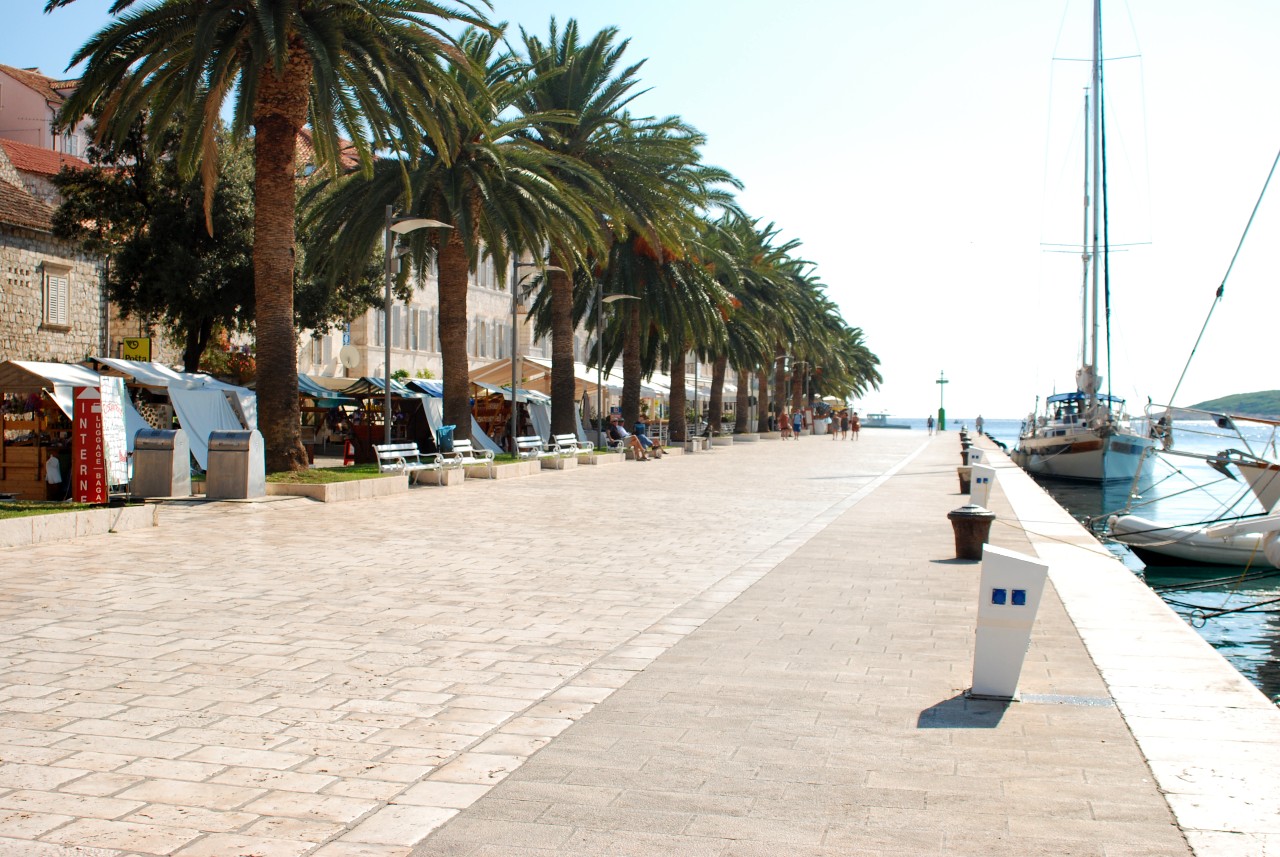 On your walk, discover many fascinating pieces of the town’s heritage.

In the harbor of Hvar right by the promenade, you can almost always find moored luxury yachts, as well as simple fishing boats. Both kinds together make a lovely sight. 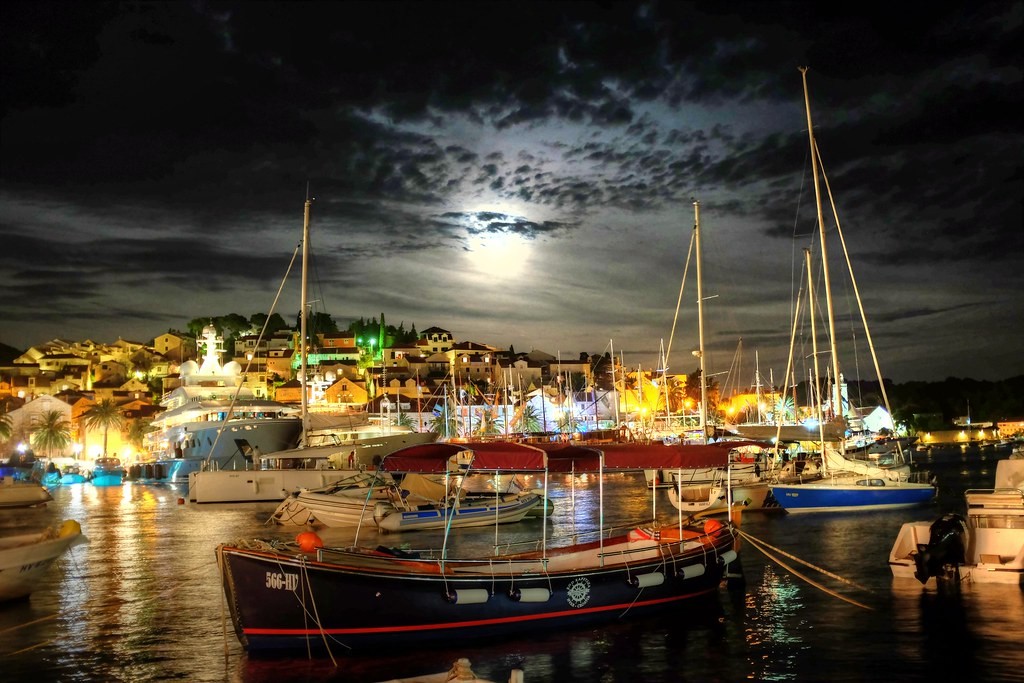 When you proceed forward from the harbor, you will soon spot the town’s main square to the right – St. Stephen’s Square, the largest square in Dalmatia and often considered the most beautiful one, with St. Stephen’s Cathedral at the top end. The cathedral was built back in the 16th and 17th centuries, and it has a stunning bell tower.

Just a little further ahead pass St. Stephen’s Square (on the left side of the beginning of the square), there are the Renaissance-style loggia and its clock tower. Today, both the loggia and its tower belong to the 5-star Palace Elisabeth heritage hotel.

On the right side of the beginning of the main square, and you could say opposite to the Palace Elizabeth, is located the Arsenal, Croatia’s first theatre and also the oldest municipal theatre in Europe. It was built at the beginning of the 17th century, and from 1612, its first floor is home to the theatre.

Further ahead following the town’s waterfront promenade you can find the Franciscan Monastery (built in the 15th century) and in there, enjoy observing a remarkable painting of the Last Supper (cr. Posljednja Večera). 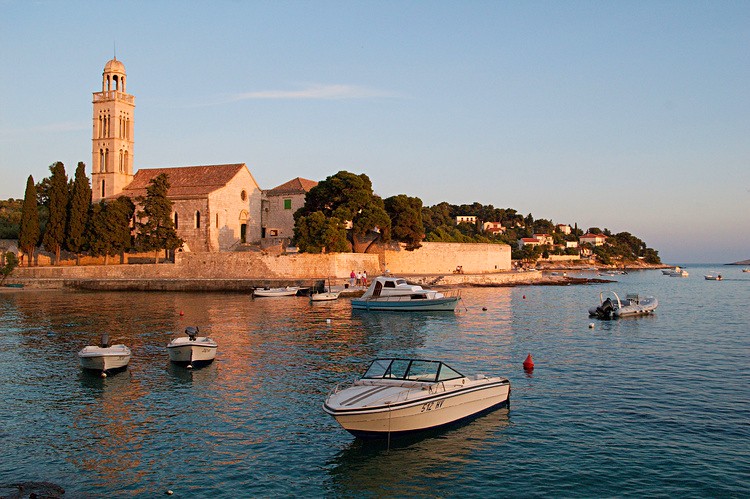 Boats in front of the Franciscan Monastery

At one point along the promenade, you can spot a winding stepped path that leads all the way up to the fortress Fortica (Spanjola) that overtops the town. It is the remarkable historical fortress that offers a breathtaking view over the town and the harbor, and that is visible even from a sailboat when arriving in Hvar. Spanjola was built in the 16th century and renovated by the Austrians 3 centuries later. Up there, you can find a small gift shop and a café bar to sit for a refreshment after a tiresome walk up the stairs in the sun. 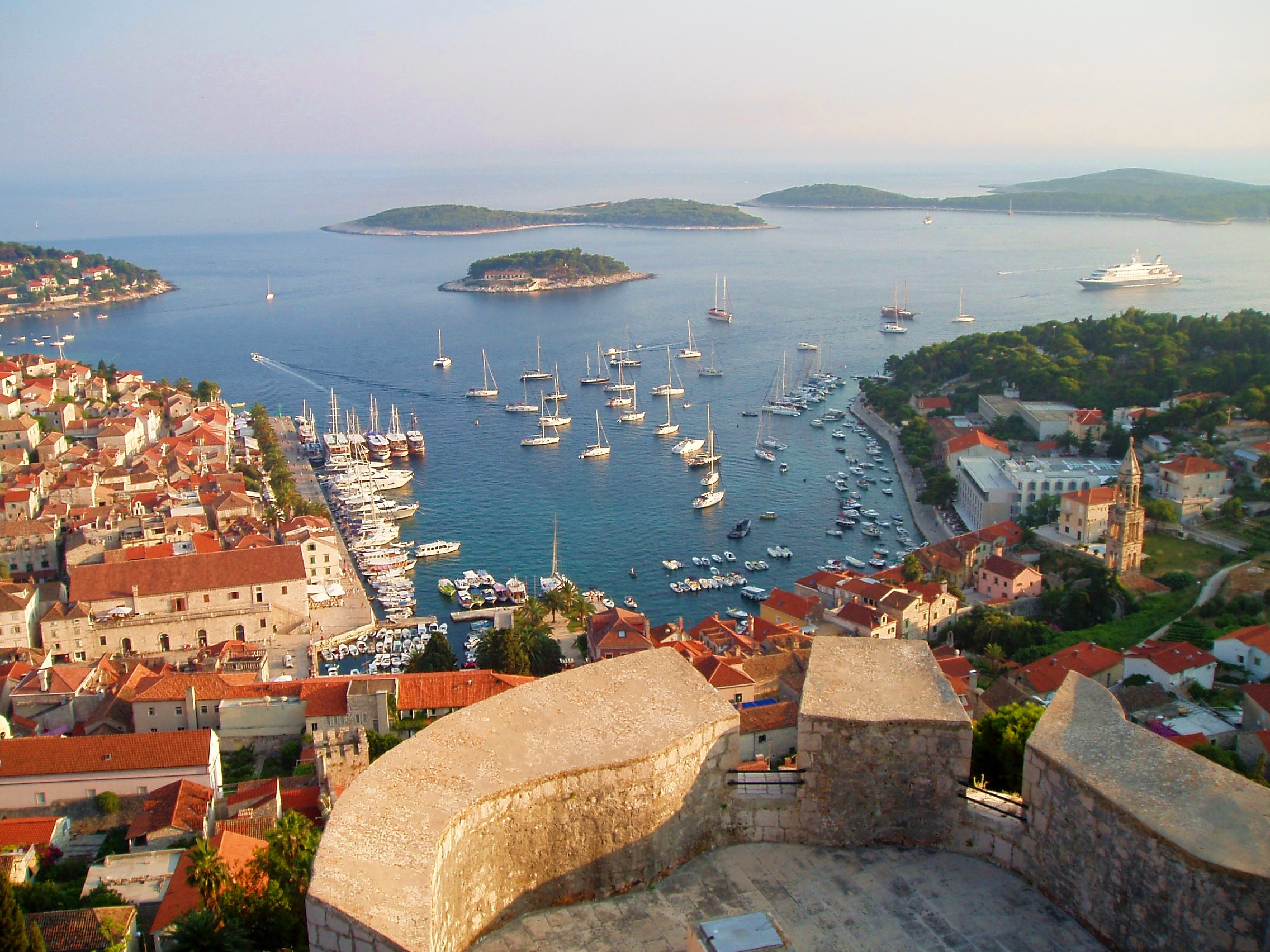 Hvar town and harbor - breathtaking view from the fortress 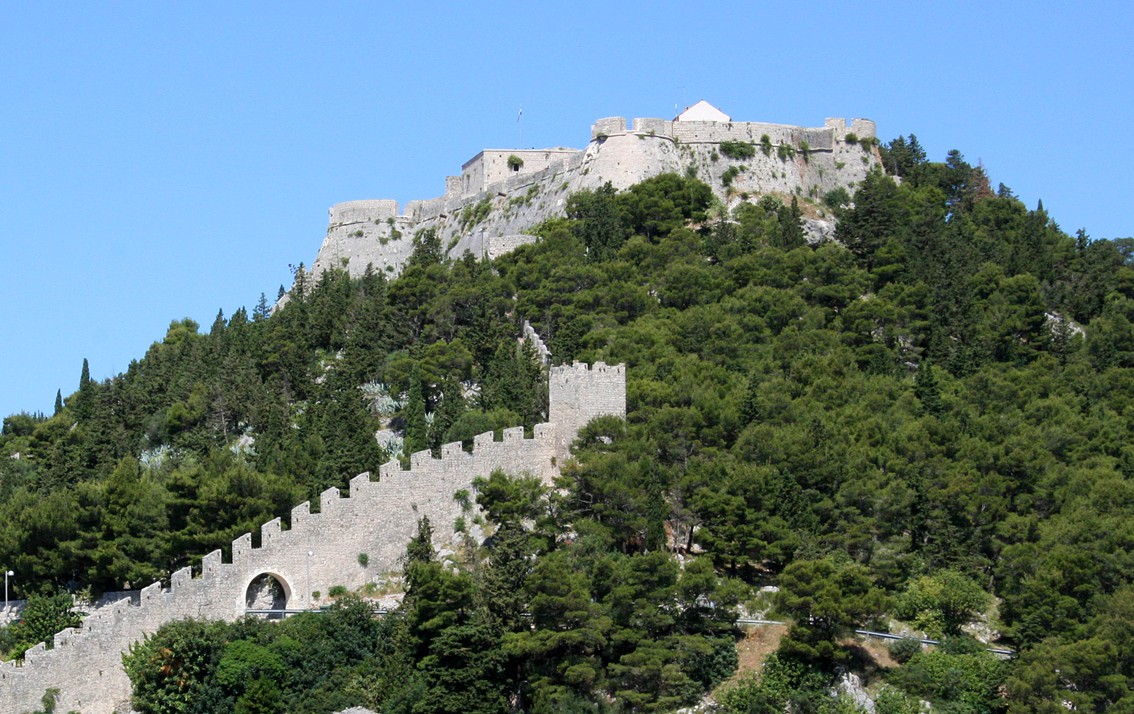 Apart from these cultural heritage sites that can be discovered when following the waterfront promenade, there are also many others in the town.

For example, the Bishop’s Palace at the eastern end of the main square, the Gothic palaces Paladini Palace and Hektorović Palace on the northern side dating from the 15th century, or Ljetnikovac Hanibala Lucića lying outside the town walls.

The town is surrounded by many intact bays, some of which can be reached by car, and others by taking a bike or a walk through beautiful Mediterranean landscapes. Other mesmerizing bays can be found on the islands near Hvar.

We are talking about a group of 20 something islets and rocks situated in front of Hvar, by the name of Pakleni Otoci - Hell Islands (or Hvar’s isles, as locals would refer to them). This is a unique and the most recognizable natural beauty of Hvar. 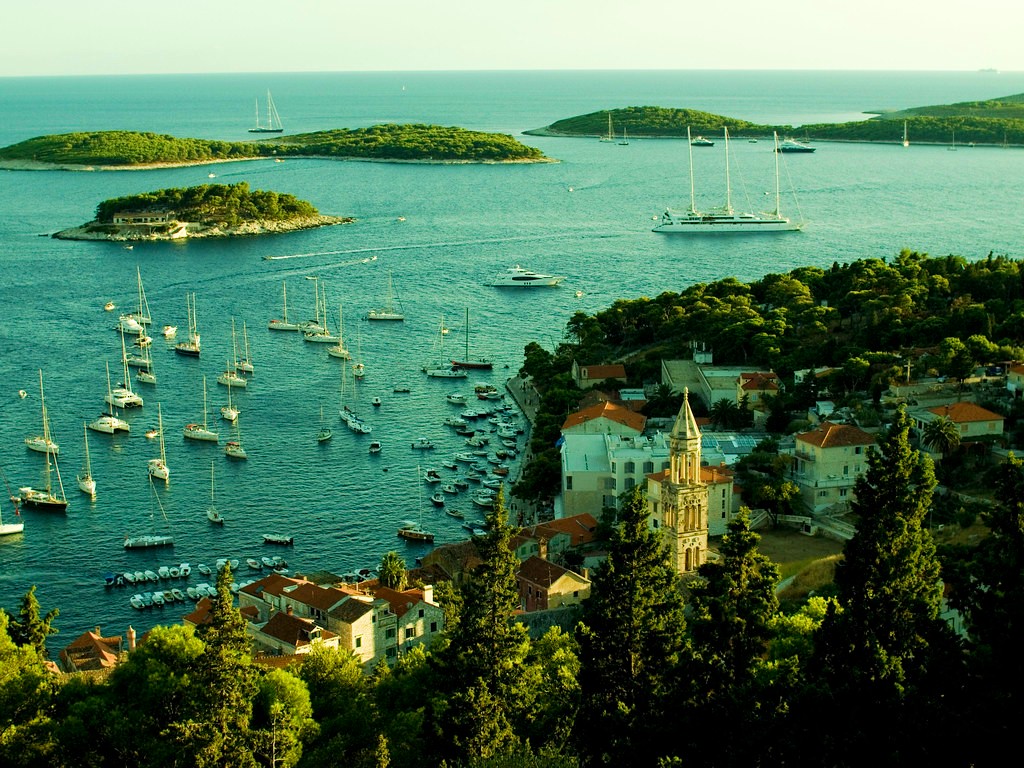 View over Hvar town and Pakleni Islands in front of it

St. Klement island is the biggest island in the group, with many beautiful bays to visit when sailing in Croatia. Taršće bay is one of them and you can stop there for swimming/sunbathing or lunch, and in the afternoon, you can go to the well-equipped ACI marina Palmižana for overnight mooring.

Palmižana is the bay/village on the northern side of St. Klement with a number of excellent restaurants.

Walking from Palmižana bay over the hill (10 minutes) through the botanical park, you reach beautiful Vinogradišće bay with a white sandy beach and turquoise color of the sea. Take a break in one of the restaurants which terraces border the seafront. HVAR  is to be reached by taxi boats operating till late in the night.

To be honest, during hot summer months, Hvar town is not really one of those locations where you look for peace and quiet, especially not in the evenings.

If you are a fan of places that are full of life or you just want to be part of the crowd for one night, visit Hvar on your sailing holidays in Croatia and enjoy!

In the morning, the town is the calmest, since many of the tourists are young people who come here to party. Therefore, they are normally not in the streets during the morning. After lunch and in the early evening, the café bars, restaurants, and the promenade are swarming with people.

The town’s nightlife is what many people come to visit it for, so after having lunch/diner and an ice-cream or a drink in a café bar, and after the walk around the old stone streets, follows a night to remember. People like to hang out in one of the cocktail bars (Carpe Diem bar, Hula-Hula bar, Kiva bar…) and stay there the whole night or go and party in a club. 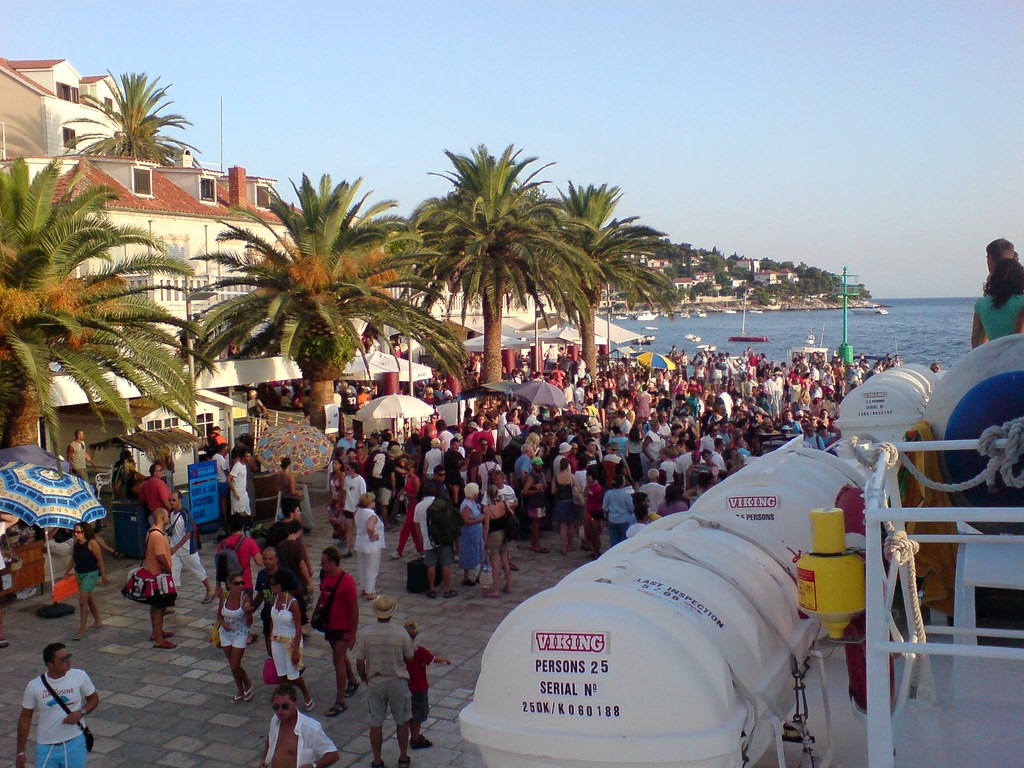 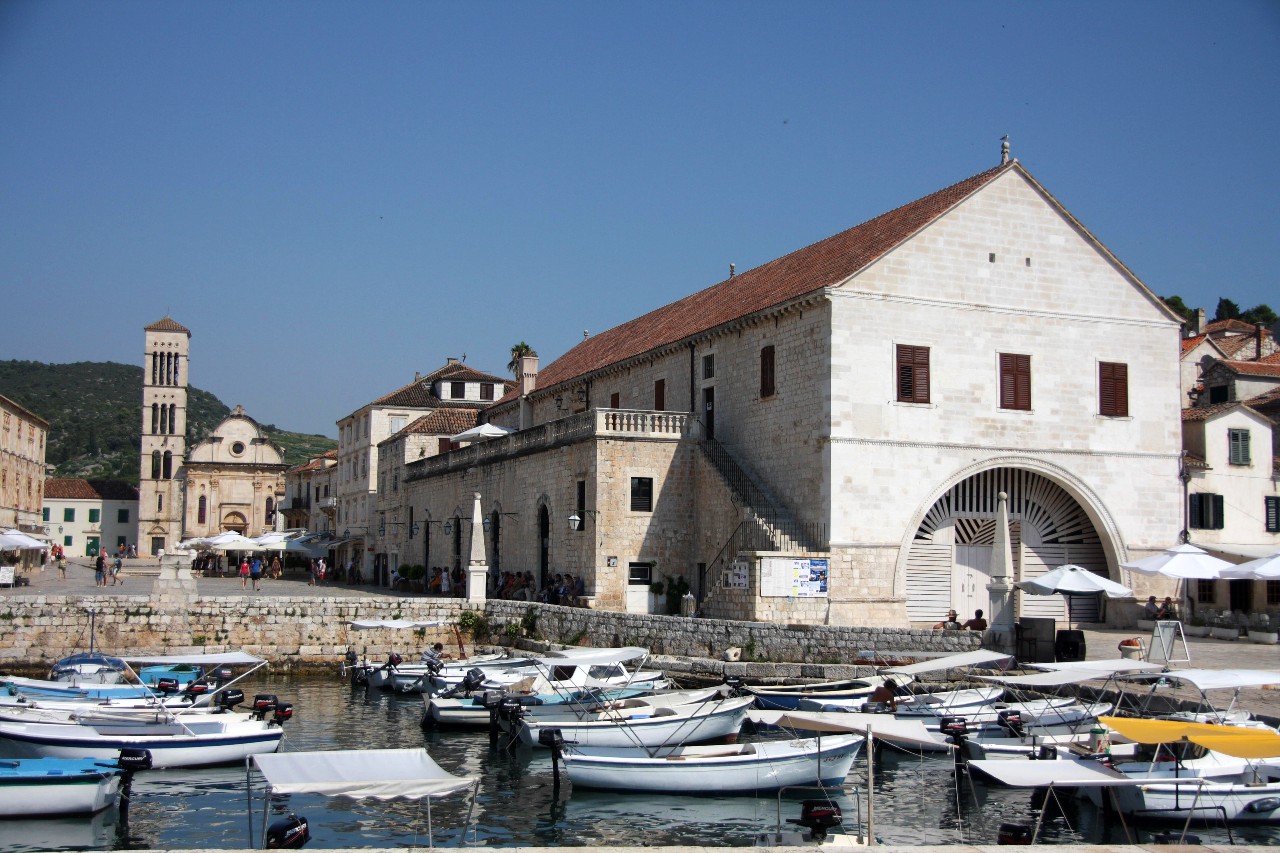 * Mooring with the sailboat in the harbor of Hvar is almost impossible in the season since the rather small and narrow city's harbor is occupied with vessels in the range from local fishermen's boats to megayachts, and there is no reservation possibility. Apart from moorings and buoys in the harbor of Hvar, there are other berth options outside Hvar town either on Pakleni islands in front of Hvar or in bays close to Hvar. Hvar is then, in most cases, reachable by taxi or tourist boats or land taxi if you are in a bay close to Hvar town.

We always recommend consulting TripAdvisor to find the best restaurants.

Some of the restaurants in Hvar: