SPLIT - THE BEST STARTING POINT FOR SAILING HOLIDAYS IN CROATIA

Located in the central Dalmatian region on a small peninsula between mountains and the sea, Split is the second-largest city in Croatia and the largest on the Adriatic coast. As a typical Mediterranean city with a small-town vibe, Split offers the right balance between tradition and modernity. Once considered as simply the gateway to the islands, it is now deservedly becoming a destination in its own right. Besides the city’s main landmark – the Diocletian palace – there is so much more to see and to do in Split, it all depends on your personal likings and on the length of your stay.

Its central location on the Eastern Adriatic coast makes Split the best starting point for sailing holidays in Croatia since from Split you can go either to the south or to the north choosing amongst the numerous possible sailing routes and it is also easily accessible by any means of transport: plane, car, ferry, train, bus.
Once that you have booked your sailing holidays from Split, organize your schedule in the way that you will have at least a few hours for a visit to this remarkable city; it would surely be worth it. 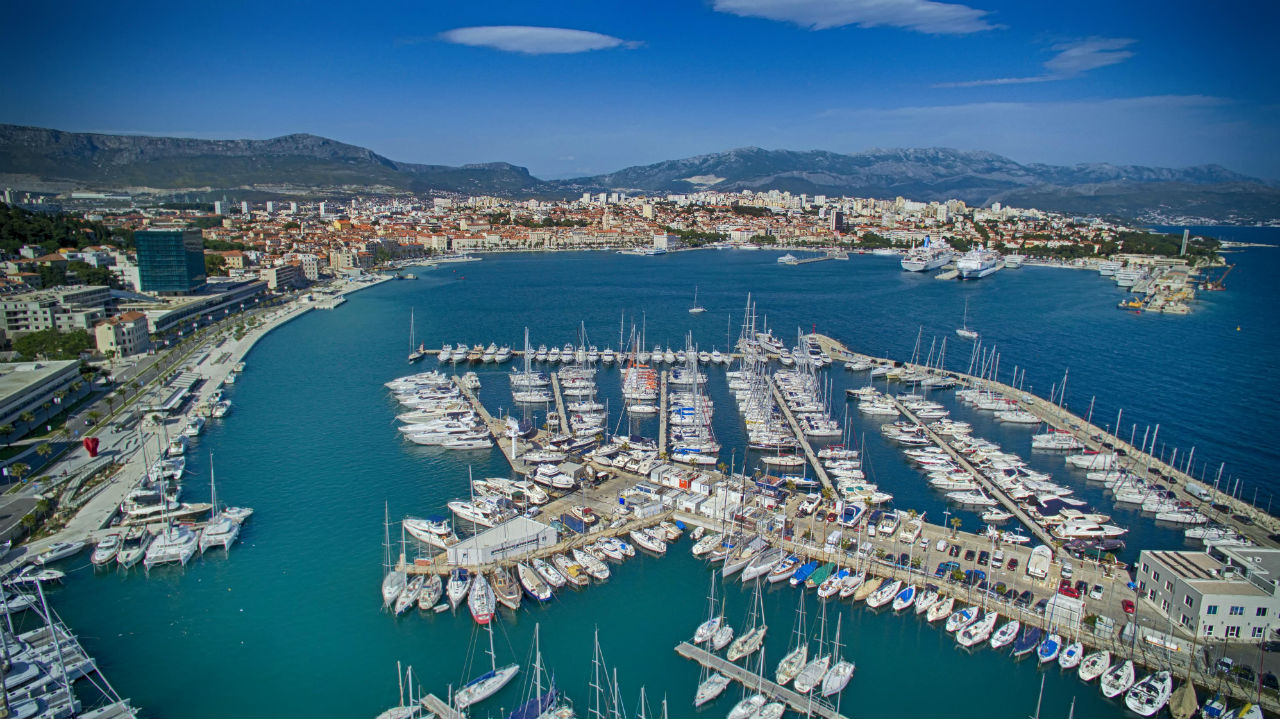 THE MOST IMPORTANT LANDMARKS OF SPLIT

1700 years ago the Roman Emperor Diocletian gave up the throne and decided to build a palace on the peninsula just next to the Roman city of Salona to spend his retirement there. During the course of the years, the Palace turned into a city, the city of Split. The Palace and the entire historical centre have been on UNESCO’s list since 1979 not only for the Palace being one of the best-preserved Roman monuments in the world but also because it continues to live, it is full of shops, restaurants, cafes, museums, bars, apartments ….There are about 3,000 people residing in this part of the town. 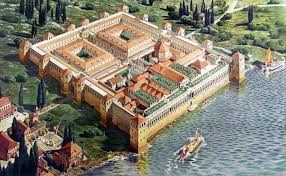 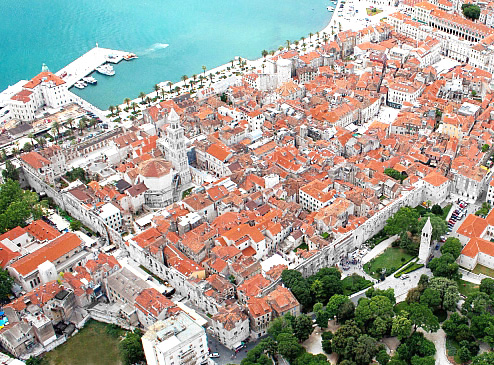 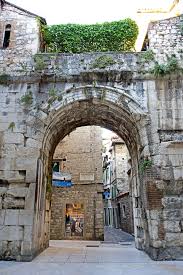 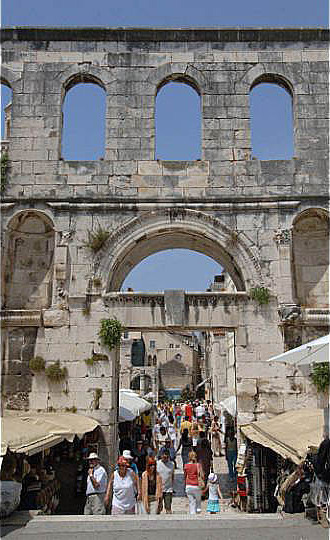 Saint Duje, as the Saint is locally known, is the Patron Saint of Split. Today’s Cathedral of Saint Dominus was originally built to be Diocletian’s mausoleum. It holds the record for being the oldest Catholic cathedral in the world that remains in use in its original structure. Make sure to climb the Bell Tower for a stunning view of the entire city and the central Dalmatian islands. 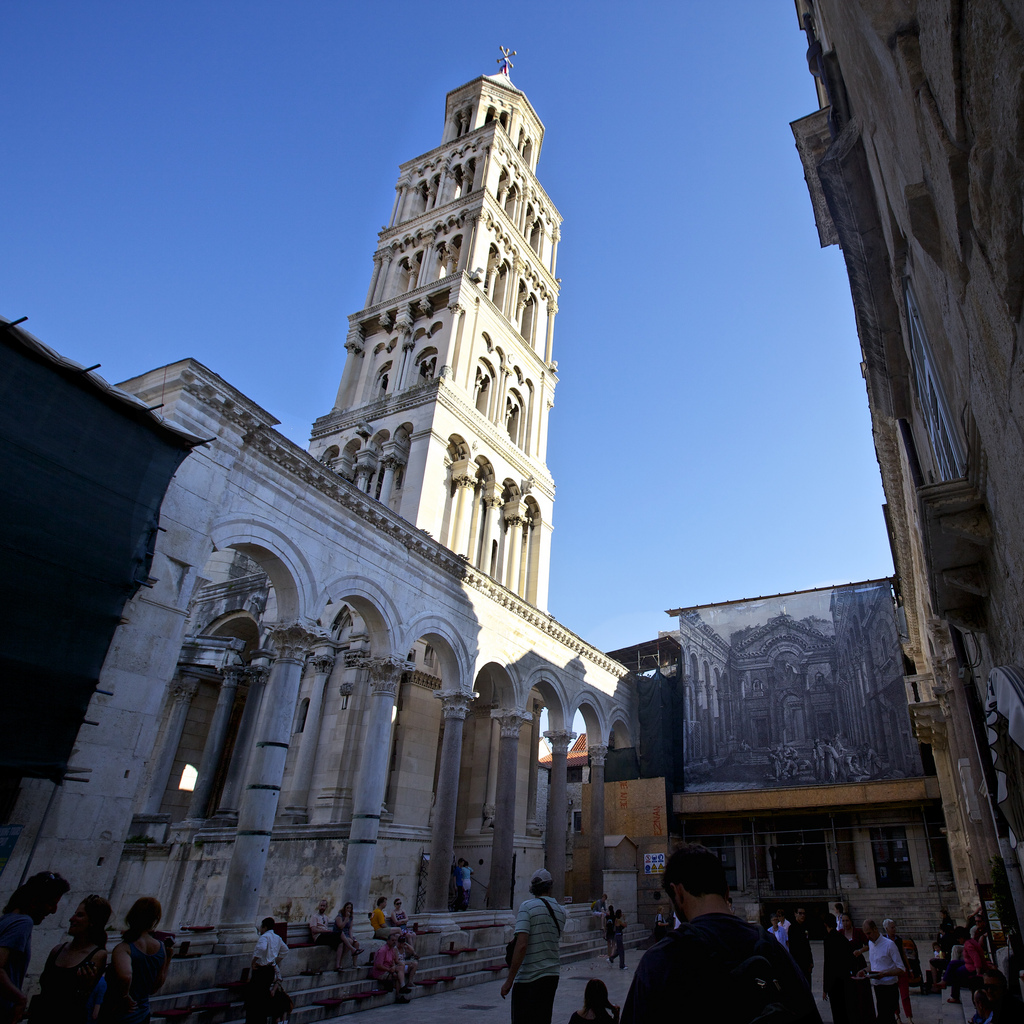 Collonaded ancient Roman courtyard (or peristyle) is the central square of the Palace. It is placed in front of the Cathedral of Saint Dominus (ex Diocletian’s Mausoleum) and it used to be a place where Diocletian would appear to be worshipped as the son of Jupiter and it was at the entrance to the Emperor’s living quarters.  Today it is the favourite place of both the citizens of Split and tourists for a break over a cup of coffee on the stairs encircling the square.  Thanks to its unique acoustics, the Peristyle is used for theatre performances during the summer. 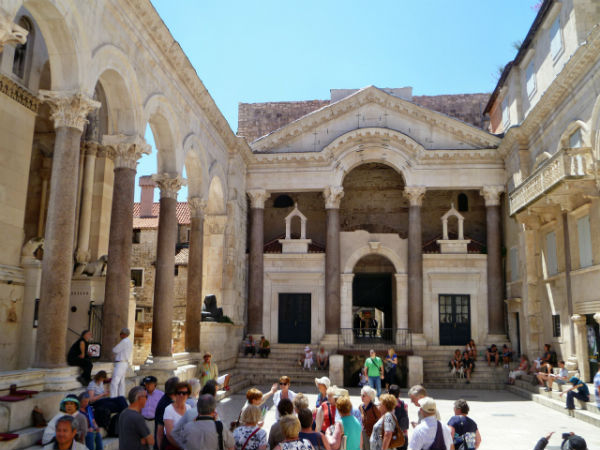 Imposing 6 feet tall statue created by famous Croatian sculptor Ivan Meštrović is placed just out of the Golden gate. Rub his thumb for good luck and realization of desires. 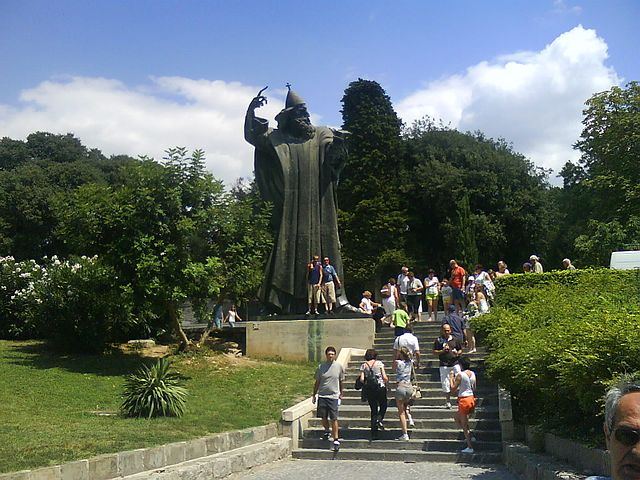 It is the main square in Split but it is not inside the walls of Diocletian Palace, but just outside of it, you reach it passing through the Iron gate, one of the four gates of the Palace. One of the stunning buildings on Piazza is the first town hall. Many restaurants and cafes with outdoor seating are to be found on Piazza nowadays. 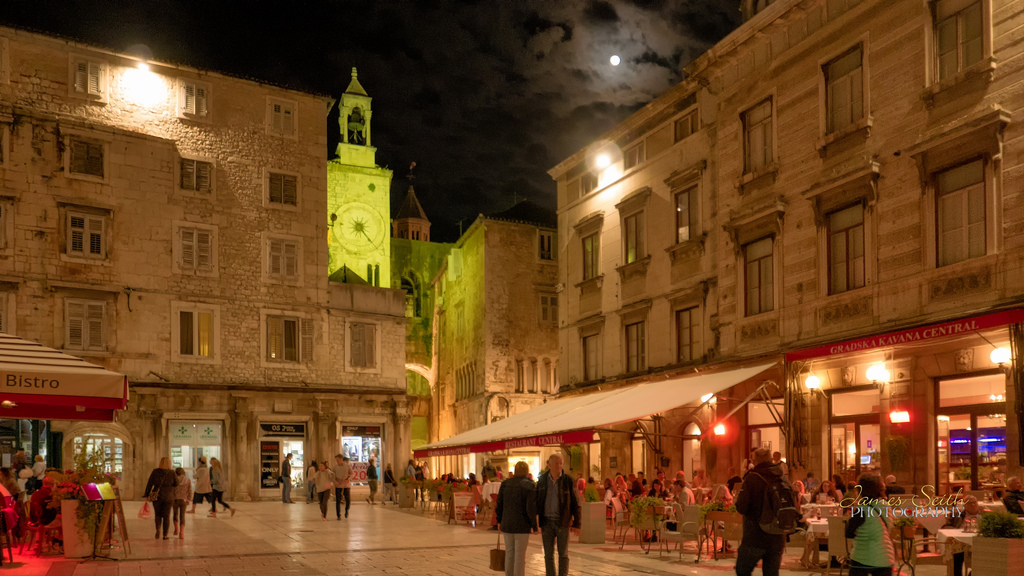 Or officially Square of Radić brothers derives its name from the fact that in the past the women from the surrounding villages sold their fruit there. This small square is full of life in its cafes, restaurants and shops. In the central part of the square is placed the monument to the “father” of Croatian literature Marko Marulić. 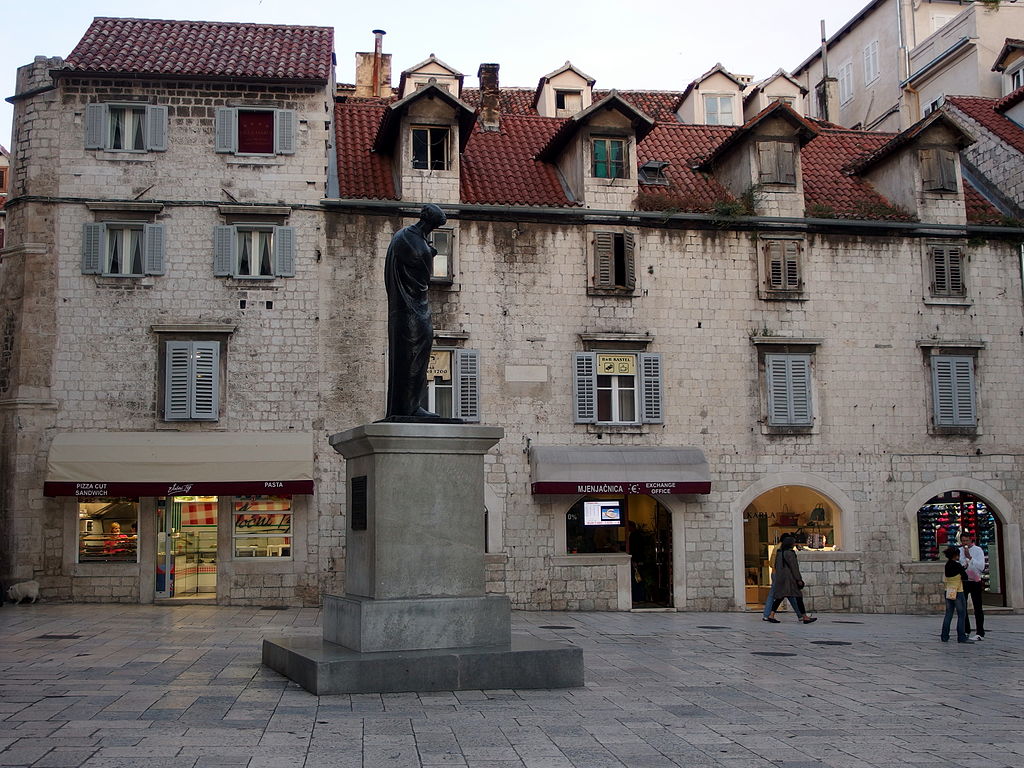 Large square situated west of Riva promenade with the fountain in front of it is officially called the Republic Square and it was designed as a replica of St.Mark’s Square in Venice. The square got its popular name Prokurative from the porticoes that it is surrounded with.

An old Split borough situated at the foot of Marjan hill, west of the Palace’s walls. Characteristic for its typical Mediterranean stone houses and steep narrow streets, Varoš once was the settlement of Split fishermen and farmers while today it is the place of modern tourist accommodation, fancy restaurants and shops.

The permanent museum exhibition relates to the growth and development of Split over the centuries. However, many find the very home to the Split City Museum itself, the splendid gothic palace – Papalić Palace,  built by a native master Juraj Dalmatinac, more interesting to pay a visit than the exhibition itself. The museum also contains a gallery of Emanuel Vidovic, one of the most important Split painters of the 20th century.

The Archaeological Museum of Split, founded in 1820, is the oldest museum in Croatia. It is home to intriguing archaeological objects from different periods of colonization in Dalmatian area. Greek, Roman, Medieval Ages and Early Christian artefacts are preserved and displayed, many of which come from Salona.

Ivan Mestrovic is the best known modern sculptor of Croatia. What is now the gallery dedicated to him was his residence in the period from 1931 to 1939. The gallery houses many of his great pieces.

Ethnographic Museum is located next to Peristyle, the central square of the Palace. Exhibited are extremely valuable ethnographic collections presenting how the citizens of Split, the Islanders and the peasants of Dalmatian hinterland used to live.

THINGS TO DO DO

The two markets in Split are not adjacent, they are placed on the opposite sides of the old town of Split – the Green Market on the east and the Fish Market on the west; but both are worth visiting whether or not you need to buy anything. On the Green Market, the offer is very wide: it ranges from fresh veggies and fruits, olive oil, grappas, cheeses, bacon and prosciutto to clothes, tools, electronics and similar.

The Fish Market, however, is narrower: you can find fish and seafood offered by local fishermen. Also, while the Green Market is an outdoor market, the Fish Market is partially indoor, located in an architecturally interesting building built in Secession style. 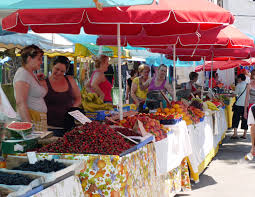 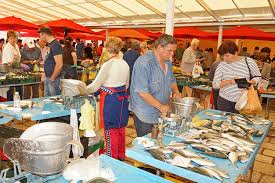 Marjan, nicknamed “the lungs of Split”, one of the best-known symbols of the city, is the wooded hill which dominates the centre of Split and its waterfront promenade. It can be reached from various sides, but if you are looking for the best view of Split and the surrounding area, take a walk from the city centre to “Prva Vidilica”. 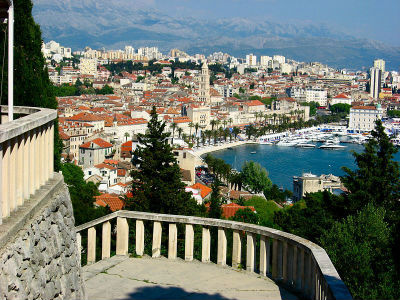 Palm-lined waterfront promenade called “Riva” is the iconic place in Split, it’s a place to see and where to be seen. It is the stage for all the happenings in Split: New Year's Eve celebration, protests, strikes, concerts. Riva is the place where the citizens of Split stroll, meet, interact or take a coffee in one of the many cafes that the Riva is flanked with. 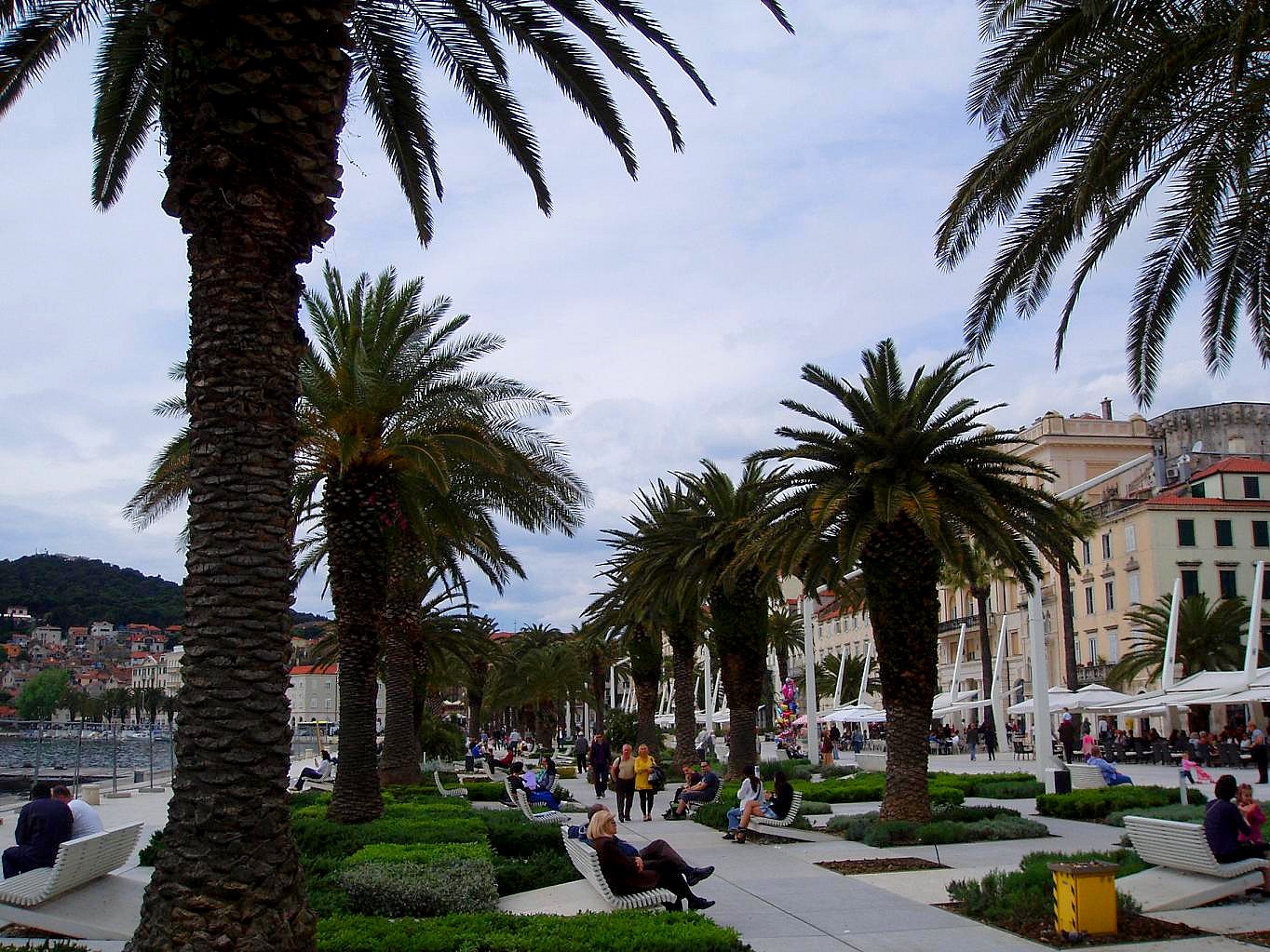 ONE DAY TRIPS FROM SPLIT

UNESCO protected, the old town of Trogir is located on an island and connected by bridges with the mainland and the Čiovo island. This city–museum is known for the well-preserved buildings of Renaissance, baroque and Romanesque style. The best-known sites include the Cathedral of St. Lawrence, Cipiko Palace, Kamerlengo Castle and St. Mark's Tower,  the City Gates: Land Gate and The Clock Tower and City Loggia. 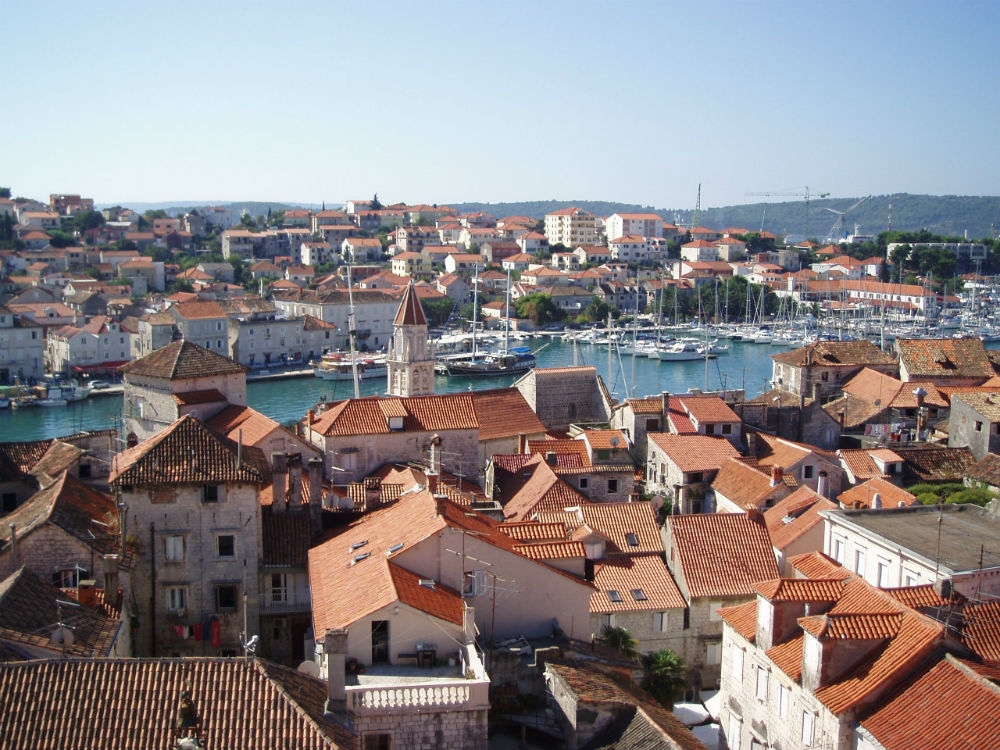 In Roman time Salona was the administrative centre of Roman province of Dalmatia. With 60.000 inhabitants it was the 4th largest town in Roman Empire destroyed in the 7th century by the attacks of Avars and Slavs. Today the remains of the monumental buildings like amphitheatre and forums, temples and thermae witness of those great times of Salona. Salona remains are located in the city of Solin. 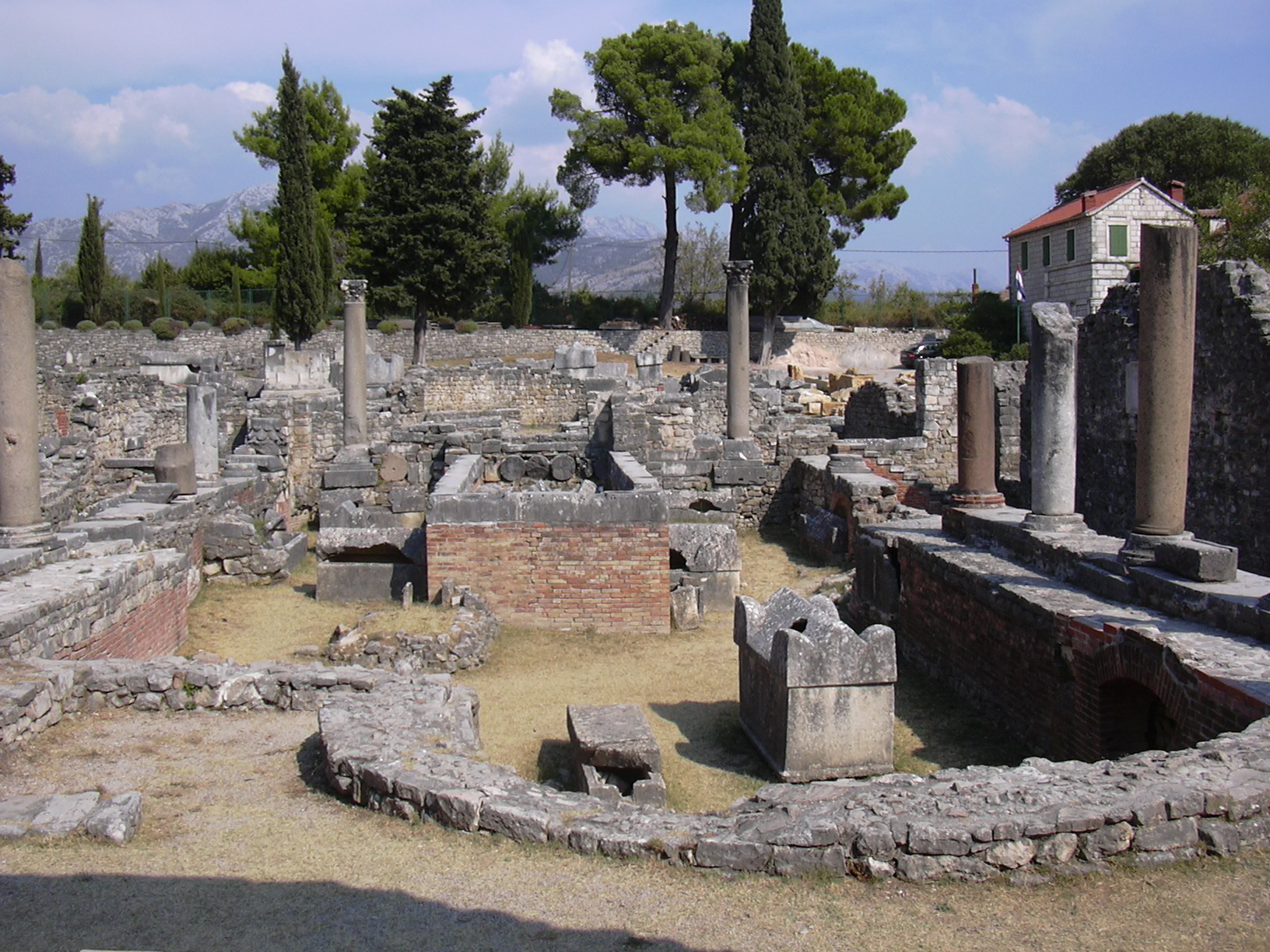 A medieval fortress situated on a mountain pass between Mosor and Kozjak Mountains, some 15 km from Split. In the last years, it has become popular as Game of Thrones filming spot but in the past, it had a significant defensive role and it is an excellent example of fortification architecture in Dalmatia. From Klis fortress, you can also enjoy spectacular views over Split and the islands. 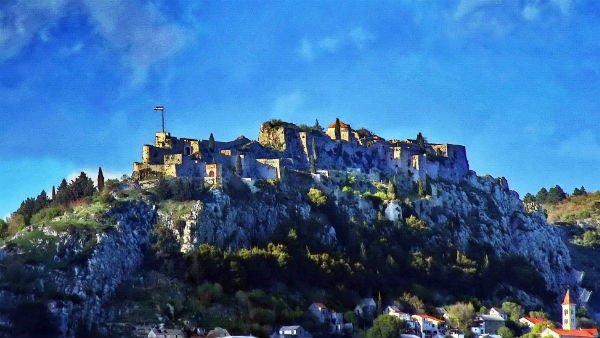 One of the Croatian most beautiful national parks encompasses the area along the course of the Krka River, which flows through a picturesque canyon for over 75 km and creates roaring waterfalls. Unlike most of the other national parks of this kind, you are allowed to swim in the Krka river and the various waterfalls, including the most famous waterfall Skradinski Buk. 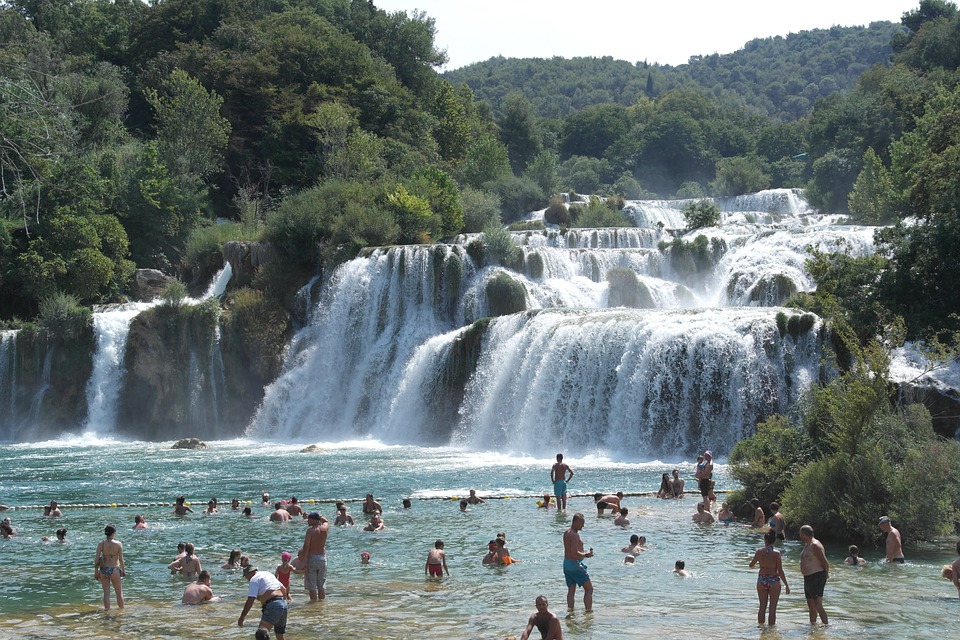 WHERE TO EAT IN SPLIT?

The gastro scene in Split has gone through the real revolution in recent years. Diverse eateries have been opening almost on a daily basis. The offer is huge and where to go depends on what kind of food you are looking for. Generally, most restaurants in Split stick to the well-tried local dishes that include: grill, stew, risotto and pasta. Anyway, as everywhere else, there are always those who stand out. Some restaurants don’t compromise with the ingredients and the quality of service and efficiently incorporate modern culinary trends into the traditional Dalmatian cuisine.

Over the last years, Split has witnessed a rapid increase of accommodation offer, mostly private apartments, but many new charming hotels and hostels have been opened as well. All of them are listed either on booking.com or Airbnb.com, but with this abundance of accommodation, it’s not always easy to choose the right place to stay. Here, we list some of them based on personal experiences of our clients, since we cannot have a first-hand experience for this type of accommodation in Split. Please, check the ratings of each accommodation for yourself and decide if it would work for you. On average, due to the large competition, the private apartments in Split have excellent reviews.